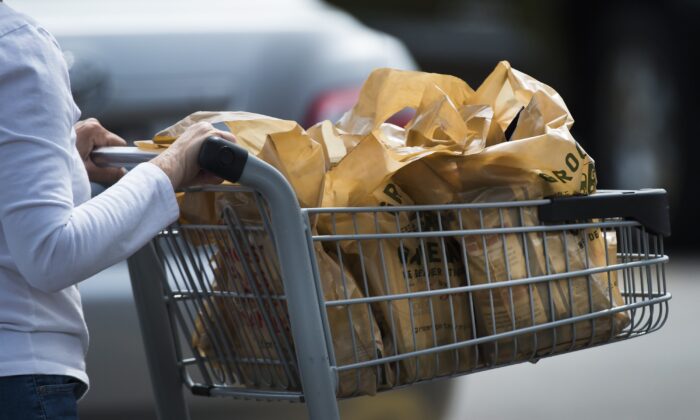 A woman leaves a grocery store in Mississauga, Ont., in a file photo. (The Canadian Press/Nathan Denette)
Canada

Over Half of Canadians Say They Can’t Keep Up With Rising Cost of Living: Poll

More than half of Canadians say they can’t keep up with the rising cost of living, according to a recent poll by the Angus Reid Institute.

The survey, published on Aug. 22, found that 56 percent of Canadians say they are struggling to keep pace with soaring prices as high inflation continues to force them to penny-pinch.

“The level of month-to-month price increases was the lowest so far this year. However, prices have risen by 7.6 per cent since July 2021, meaning there is much work for the Bank of Canada left to do to return the country to its target rate of two percent,” the polling firm said.

“Through it all, many Canadians are responding to price increases with spending decreases.”

On Aug. 16, the agency reported that while gasoline prices declined on a monthly basis in July, food prices were up by almost 10 percent compared to a year ago—and at the fastest pace since August 1981, Angus Reid noted.

The online survey, conducted with a randomized sample of 2,279 Canadian adults who are members of the Angus Reid Forum, indicated that three-quarters (76 percent) of the respondents are stressed about money.

Vacations are also taking a back seat, as 32 percent have either cancelled or scaled back their travel plans. Another 19 percent chose to defer contributions to their tax-free saving accounts or registered retirement savings plans. When it comes to donations and charitable giving, one-quarter (27 percent) said they’ve trimmed those back as they adjust their budget.

Half of the respondents (52 percent) said they would not be able to manage a sudden expense of more than $1,000, including 13 percent saying any surprise expense would be “too much.”

If they were to receive a surprise bonus or gift of $5,000, nearly half of Canadians said they would use it to address financial obligations, with 10 percent addressing immediate obligations and 38 percent addressing long-term ones. The other half would save the money (43 percent) or make a pricey purchase (9 percent).