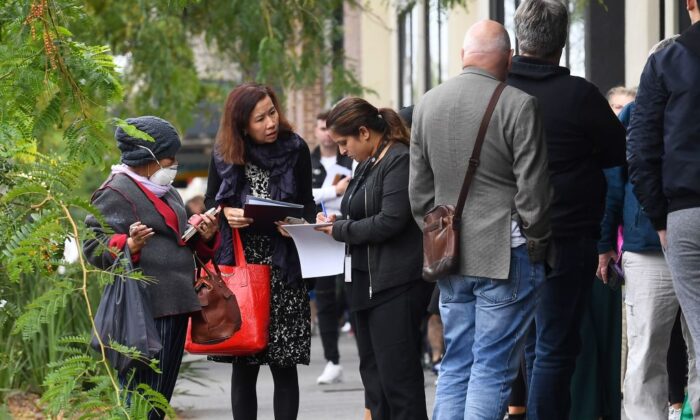 Queues stretched around the block at a Centrelink office in Melbourne on March 23, 2020. (William West/AFP via Getty Images)
Australia

Australian superannuation (super) funds have already processed over $6.3 billion worth of withdrawals to over 830,000 Australians who have requested an early release of their retirement nest eggs in the first two weeks since the measure was implemented, according to figures released on May 11 by the Australian Prudential Regulation Authority (APRA).

The publication of the first round of weekly fund-level data on the Early Release Initiative (ERI) coincides with the Australian Tax Office ( ATO ) resuming application processing after a temporary suspension last Friday in response to fraudulent activities involving identity stealing.

The early access scheme, which was launched last month as part of government’s economic responses to the crisis induced by the CCP (Chinese Communist Party) virus (commonly known as novel coronavirus), allows individuals suffering financial hardship to take out $10,000 from their superannuation before June 30, and a further $10,000 between July 1 and September 24. Both payments are tax-free.

Most Withdrawals Come From Hardest-Hit Industries

According to APRA’s figures, as of May 3, the average super withdrawal was $7,629 and the average processing time was 3.1 days after receiving the application from ATO.

Among the 142 funds that have made the payment, 117 managed to complete 90 percent of payments within five business days guideline indicated by the APRA.

The five leading funds with the highest number of applications have made nearly 550,000 payments worth a total of $3.1 billion, with the country’s largest fund, AustralianSuper, topping the list, followed by Hostplus, Sunsuper, REST (Retail Employees Superannuation Trust), and Cbus (Construction & Building Unions Superannuation).

The five funds represent a significant proportion of workers within industries hardest hit by the CCP virus, including retail, hospitality, building construction, and aviation.

By May 3, AustralianSuper has paid out $763.8 million to nearly 100,000 members, with an average payment of  $7,687 each. It reported that 98 percent of the applications were processed within five business days.

Hostplus, the industry fund for tourism and hospitality, reported its early release amount has surpassed $660 million, with over 93,000 members having been paid as of May 3, with an average payment of $7,062.

As thousands of airline workers have been stood down, Sunsuper, the default super fund for Virgin Australia, has paid out over $784 million to 108,000 members as at May 3, with 100 percent of applications being paid within five business days.

APRA deputy chair Helen Rowell was satisfied with the processing speed achieved so far, acknowledging that super funds understand the importance of timely payments to its members suffering financial hardship.

“This is a new scheme, and some funds have received tens of thousands of applications, so an average payment time so far of 3.1 days following receipt of applications from the ATO is a positive story,” she said in a statement.

Rowell also reminded fund members to practice patience with longer processing time in the circumstances where it was “both necessary and appropriate.” This could be in cases of incomplete information, application errors, verification mismatches, or fraud concerns.

“This is no doubt frustrating to those awaiting payments, but the recent attempted fraud being investigated by the Australian Federal Police emphasises that care is needed to ensure payments go to the right people,” she said.

Minister for housing and assistant treasurer Michael Sukkar confirmed on May 11 that ATO’s online system had not been comprised and enhancements had been made to increase the end-to-end security of the scheme.

He also reiterated the warning from the ATO that Australians should be vigilant with how they store and share their personal information.

“Australians should never share their myGov log-in with anyone, including their tax agent, and be wary of emails or text messages that request personal information,” he said in a statement.

“The ATO will never send taxpayers a direct link to log on to their online services.”

Assistant Minister for Superannuation Jane Hume wrote on Twitter on the same day, saying that she was confident in the security of the ATO’s system.

Australians can have confidence in the security measures the ATO has in place to protect the integrity of the early release of superannuation scheme.

Reminder: never share your myGov log-in with anyone, including your tax agent.https://t.co/HX0jBXAFcY

“Australians can have confidence in the security measures the ATO has in place to protect the integrity of the early release of superannuation scheme,” she said.

According to government figures, as of May 11, more than 1.2 million Australians have applied to access their super early amounting a total value of over $10 billion.