Over 800 Unaccompanied Children Crossing Border Illegally Apprehended in One Day 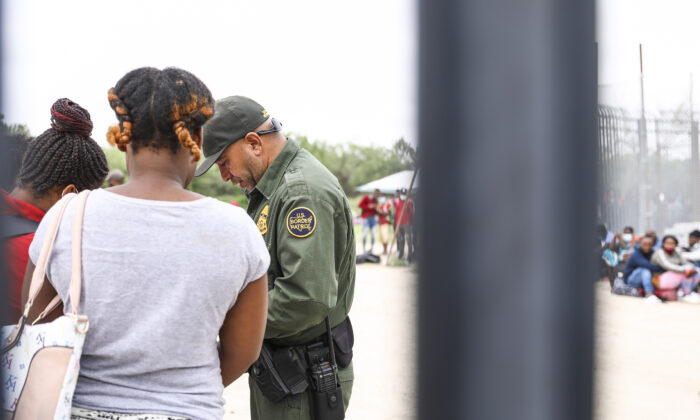 A Border Patrol agent starts organizing a group of more than 350 illegal immigrants after they crossed the Rio Grande from Mexico into Del Rio, Texas, on July 25, 2021. (Charlotte Cuthbertson/The Epoch Times)
By Tom Ozimek

The data, which was first reported by the Washington Examiner, came on the heels of preliminary Department of Homeland Security (DHS) figures indicating July border crossings by unaccompanied minors would hit an all-time high.

Lawmakers from both sides of the aisle have been critical of the Biden administration for setting policies that they say are fueling the border surge.

Members of the Biden administration have pushed back on the claim that their policies are what’s driving the trend, blaming seasonal factors, unaddressed “root causes” in home countries that drive people to flee their homes, and what DHS Secretary Alejandro Mayorkas said was a “dismantled” Trump-era immigration system that’s hindering the response to the crisis.

Wednesday’s single-day apprehension record came just days after David Shahoulian, assistant secretary for border and immigration policy at DHS, estimated in court filings that more than 19,000 unaccompanied children were encountered along the southern border in July, a new all-time high.

While the figures are preliminary and U.S. Customs and Border Protection (CBP) has yet to include the official July tally in its encounters database, the number Shahoulian cited exceeds the previous peak of 18,877 children crossing the border without parents or legal guardians in March.

Unaccompanied children are exempt from a policy known as Title 42 that allows government workers to immediately expel anyone caught crossing the border illegally without a hearing as a measure to reduce the risk of COVID-19 transmission.

The Biden administration continues to expel single adults and family units under Title 42 authority, which was used to expel 104,907 people in June alone.

On Monday, the Biden administration extended the Title 42 order, with the Centers for Disease Control and Prevention (CDC) announcing that the measure would remain in place “until the CDC Director determines that the danger of further introduction of COVID-19 into the United States from covered noncitizens has ceased to be a serious danger to the public health.”

It comes as the rate at which individuals taken into custody after crossing the border illegally are testing positive for COVID-19, the disease caused by the CCP (Chinese Communist Party) virus, has “increased significantly” in recent weeks, according to DHS officials.