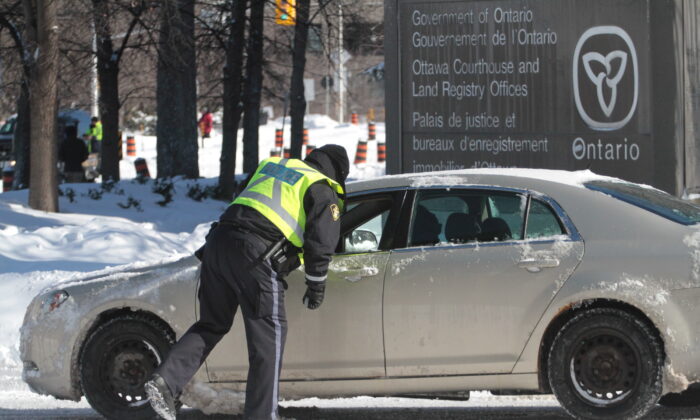 A police officer checks if a driver is exempt from a ban on people entering Ottawa's central area on Feb. 18, 2022 during the Freedom Convoy protest. (Richard Moore/The Epoch Times)
Canada

The Ottawa Police Service (OPS) has called for staffing support of over 800 RCMP officers in preparation for the arrival of the Rolling Thunder motorcycle convoy due to arrive in the city this coming weekend.

The request to re-appoint 631 RCMP officers and appoint an additional 200 more was approved in a special meeting of the OPS Board on April 27.

The re-appointed RCMP officers were given special constable status that provided them with law enforcement capabilities within the city of Ottawa during the Freedom Convoy protest that took place in the national capital from late January into much of February.

According to a report submitted to the OPS, all appointments and reappointments will be valid until July 4, 2022.

The report said under normal circumstances, the OPS would first seek the Ministry of Public Safety’s approval for staffing support, but under “urgent circumstance” such as the upcoming Rolling Thunder protest, the agency is seeking Ministry and Board approval concurrently to expedite the swearing-in of additional police officers.

“These appointments ensure that the respective employees can carry out the full scope of their assigned duties,” the report said.

In addition, the OPS also sought the board’s approval to delegate authority to Chair Eli El-Chantiry, and Vice-Chair Suzanne Valiquet to approve any additional special constable status requests deemed necessary for the Rolling Thunder event, which the report said would allow the OPS to “respond to emerging resource needs for the duration of the event.”

“We will not allow for unsafe or unlawful conditions that could lead to another unlawful protest as seen in February,” the OPS said in an April 25 statement, referencing the Freedom Convoy trucker protest.

The Freedom Convoy protest initially started to oppose the federal government’s COVID-19 vaccine mandates imposed on all truck drivers crossing the Canada-U.S. border. As the convoy rolled across the country, arriving in Ottawa on Jan 29, it evolved into a national movement with supporters calling for an end to all pandemic-related restrictions.

Following a state of emergency declaration announced by Prime Minister Justin Trudeau, he invoked the Emergencies Act on Feb. 14 to give police extraordinary powers to remove the protesters from downtown Ottawa.

The act also allowed authorities to order towing companies to remove parked trucks and supporters’ vehicles. In the process, police wielding batons and pepper spray forced demonstrators out of the city’s core. At one point, mounted police charged into the crowd knocking people down and injuring an elderly woman who ended up in hospital.

Neil Sheard, an organizer of the Rolling Thunder event said earlier this week that he has been working with the city from the beginning, and called on participants to remain peaceful during the event.

“Remember when you’re coming in: peace, love, respect, follow the rules of the traffic, all the highway codes. Be nice people. Be the people you are,” he said in a video posted online on April 25.

Omid Ghoreishi and Noé Chartier contributed to this article