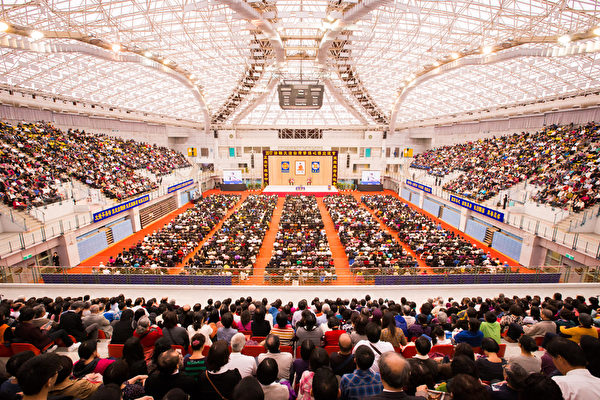 Over 7,500 Gather in Taiwan for Annual Falun Gong Sharing Conference

TAIPEI, Taiwan—The National Taiwan University Sports Center was packed on Nov. 26, with more than 7,500 people from all walks of life, hailing from a dozen countries and regions. They had gathered together not because of a sporting event, but rather to learn from each other how to be a better person, and how to better tell others about the persecution of their faith in mainland China.

The gathering was an annual experience sharing conference for adherents of Falun Gong, also known as Falun Dafa. A traditional Chinese spiritual discipline that was introduced to the public in China in 1992, Falun Dafa has slow meditative exercises and moral teachings based on the principles of truthfulness, compassion and tolerance. Tens of millions of people in more than 70 countries practice the spiritual faith, according to the official press office for Falun Gong, the Falun Dafa Information Center.

According to the Taiwan Falun Dafa Association, which organized the event, most attendees were local practitioners, but others had traveled from Malaysia, Singapore, Hong Kong, Australia, Vietnam, Japan, South Korea, Indonesia, United States, Canada, New Zealand, and Europe.

The discipline has been the target of a brutal persecution by the Chinese Communist Party that began 18 years ago, on July 20, 1999. Millions have been tortured, brainwashed, placed in forced labor camps and even killed, according to the Falun Dafa Information Center.  In addition, large numbers have suffered having their organs taken from them, killing them. Researchers say Falun Gong practitioners are the principal source of the organs used for organ transplantation in China.  As a result, Falun Gong adherents worldwide have been trying to raise awareness about the human rights violations inside China.

A total of 19 practitioners took to the podium to read their sharings. During the lunch break, a video was played on a giant screen showing the character formation—practitioners dressed in colored clothes to form a massive image seen from an aerial vantage point—that took place a day before at Taipei’s iconic Liberty Square.

Two examples provide an idea of how the Falun Dafa practitioners at the conference reported on their experiences.

Su Bing, originally from Suzhou, a city west of Shanghai, moved to Taiwan in 2008. She began practicing Falun Gong the following year. Su shared in her speech that by practicing Falun Gong, she has come to realize how her personality was negatively affected by an upbringing under the Chinese regime’s oppressive rule.

“I had a competitive personality. And I used to like getting into arguments with my husband. When he had nothing to say, I would be beside myself with joy thinking how I was very eloquent. And I also used to yell at my kids, wanting to have total control over them,” said Su.

Citing the “Nine Commentaries on the Communist Party,” an editorial series published by this publication detailing the history of the Chinese Communist Party, Su elaborated that her poor personality was the result of unconsciously picking up the Chinese regime’s propaganda, which emphasizes a philosophy of fighting, control, and deceit.

Su said she no longer argues with her husband and speaks to her children with compassion.

Another practitioner who took the stage was Hu Ching-Ni, an elementary school teacher at An Lan Primary School in Kinmen, one of Taiwan’s surrounding islets, who attributed her winning the local top teacher honor to changes in her as a result of practicing Falun Gong.

“I was extremely shy and unconfident and I now have the courage to walk on stage. It is because of Li Hongzhi, the founder of Falun Gong, who taught me how to be selfless and think about others first,” said Hu.

Hu explained that she came to realize her fear of public speaking stemmed from selfishness, caring too much about how others thought of her, and being afraid of getting laughed at.