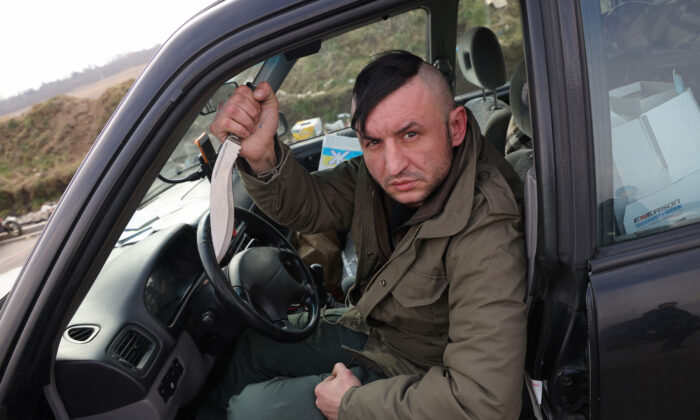 Roman, 35, a Ukrainian living in Poland, displays his knife as he waits to cross into Ukraine to join the armed resistance against the Russian invasion at the Medyka border crossing in Medyka, Poland, on March 4, 2022. (Sean Gallup/Getty Images)
Russia-Ukraine War

Over 66,000 Ukrainian Men Have Returned From Abroad to Fight, Says Defense Minister

Ukrainian Defense Minister Oleksii Reznikov said on Saturday that 66,224 Ukrainian men returned from abroad to join the fight against what Russia calls a “special military operation” in the country.

“That’s how many men returned from abroad at this moment to defend their country from the horde,” Reznikov said in a statement on social media. “These are 12 more combat and motivated brigades! Ukrainians, we are invincible.”

Last week, Ukrainian males aged 18–60 were barred from leaving the country as officials had also called on foreign volunteers to join the defense forces.

In a March 3 address posted on social media, Ukrainian President Volodymyr Zelensky said that at least 16,000 “foreign volunteers” have arrived in the country to assist with the fight against Russia.

“Ukraine has started welcoming foreign volunteers who are coming to our country. The first of 16,000 are coming to defend the liberty and life of us and of everyone. I’m sure it will be successful,” Zelensky said.

The Russia–Ukraine conflict has now entered its tenth day and around 1.2 million people have fled the war, U.N. High Commissioner for Refugees Filippo Grandi confirmed on Friday.

According to a statement by the U.N. published via Telegram, more than half of all Ukrainians who have fled the war moved to Poland—650,000 people in total. The other half has fled to either Hungary, Moldova, Slovakia, or Romania.

On Wednesday, where the roads that lead to Ukraine’s Shehyni border crossing with Poland have seen miles-long lines of people trying to flee the country for the past week, groups of young men entered Ukraine from Poland as they answered Zelensky’s call to fight.

“This is our motherland,” New York resident Vasyk Didyk, a 26-year-old carpenter who is originally from Ukraine, told CNN. “We couldn’t stay in our comfortable lives in America and watch what is happening here.”

British builder Jake Dale also said he was inspired by Zelensky’s call for aid and booked a flight to Poland on Friday together with Peter Hurst, a 36-year-old former infantry soldier with the British Army.

“As soon as I heard his [Zelensky’s] call—it made me think he needs help,” Dale said. “I think it is a worthy cause to risk my life, and my girlfriend feels the same. Obviously, she gets upset, as anyone would, but she supports it as she can see I want to help.”

The U.N. said that, as of March 3, they had recorded 1,006 civilian casualties in context of Russia’s military action against Ukraine, mostly caused by shelling and airstrikes.

The agency said that 331 civilians have been killed, including 19 children, while 675 have been injured, including 31 children. The U.N. says, however, that the “real toll is much higher.”