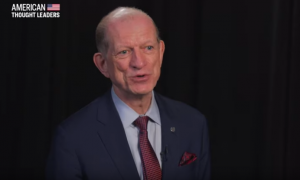 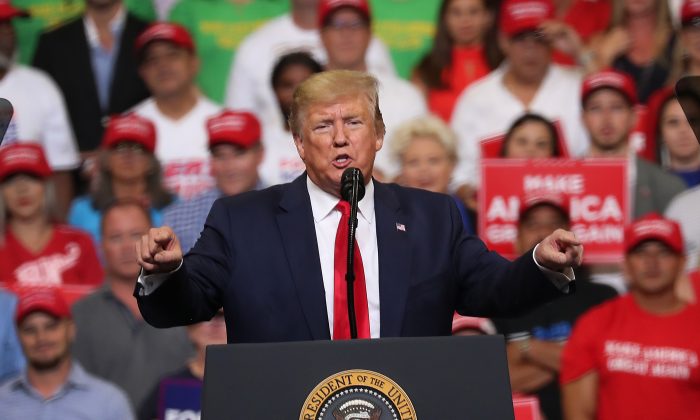 Over 600 US Companies Support Trump’s Tariffs on China: Letter

More than 600 U.S. companies signed a letter on June 21 in support of President Donald Trump’s tariffs imposed on China, backing the U.S. administration clamping down on the regime’s unfair trade practices.

The letter (pdf), signed by hundreds of U.S. producers as well as trade groups, said the administration needs to stay firm on the Chinese regime, given that the U.S. manufacturing sector is at stake. It also expressed concern about human rights abuses in China.

“If you want to get a sense of how the American people really feel about President Trump’s tariffs, take a look at today’s letter,” said Dan DiMicco, chair of the Coalition for a Prosperous America in a June 21 statement.

“Small and mid-sized companies from all over the country signed the letter—everything from apple growers, truckers, and lumber producers to steel, glass, and tire makers.

“China has been taking advantage of America’s openness for many years, and this has cost us millions of middle-class jobs. The American people are tired of it, and they support the president’s approach.”

According to the Daily Caller, the letter was presented to the Office of the United States Trade Representative (USTR) on June 21 during a hearing on regarding proposed tariffs on approximately $300 billion of Chinese goods.

It was submitted to counter another letter signed by hundreds of companies last week that opposed the tariffs. The signatories of that letter include multinationals like Walmart and Target who sell products manufactured in China.

The sign of support comes amid heightened trade tensions between the two countries. In early May, Trump increased tariffs on $200 billion worth of Chinese goods after accusing the regime of reneging on commitments negotiated over months of trade talks. The Chinese regime retaliated with tariff hikes on $60 billion of U.S. imports.

Trump has since threatened to impose tariffs on an additional $325 billion list of Chinese goods and said he would decide on whether to go ahead with these after meeting with Chinese Leader Xi Jinping at the G20 Summit in Japan later this month.

The letter countered claims made in the media and by companies with interests in China that the American people are bearing the cost of the tariffs, noting that inflation remained low in spite of the tariffs.

“China is bearing the burden of these tariffs. China has had to lower its prices, and they are experiencing fewer exports, lower profits, and lower tax revenue as a result of the tariffs,” the letter read.

“Additionally, we will see the Chinese economy experience a slower rate of growth and employment in the future,” it added.

The letter also expressed support for the president’s “steadfastness to stand up to large multinationals who have sold-out the American worker for low-cost labor from China.”

This tough stance was important, the letter continued, because of the need to maintain a strong manufacturing sector to boost jobs and also for national security reasons.

The signatories also highlighted that the Chinese regime is among the “world’s worst abusers of human rights,” and urged that human rights issues be raised during talks with Beijing.

The U.S.-China trade dispute began last March after the Trump administration said it would impose punitive tariffs on Chinese goods due to a range of long-standing unfair trade practices by the Chinese regime, including theft of U.S. intellectual property, forced technology transfer, industrial subsidies, and currency manipulation.

“The global integration project with China, through liberalized trade, has failed. The Communist Party of China has used its access to U.S. consumer and capital markets for a predatory economic strategy to grow its state-owned enterprises, finance its military build up, imprison its citizens in modern day concentration camps and challenge America’s geopolitical power,” said Michael Stumo, CEO, Coalition for a Prosperous America, The Daily Caller reported.

“Our American companies and workers have been weakened by this failed experiment. We want it to stop,” Stumo added.

According to the Daily Caller, the president of the Automotive Parts Remanufacturing Association Joe Kripli said, “for years now the Chinese ‘knock-off’ of starters and alternators that have been entering the country at ridiculously low cost and have been hurting the small [U.S.] remanufacturer that is located in every state and has been in our communities since WWII.”

Trump has repeatedly said he hoped the tariffs would convince companies to move their production of U.S.-bound goods away from China, including to the United States.