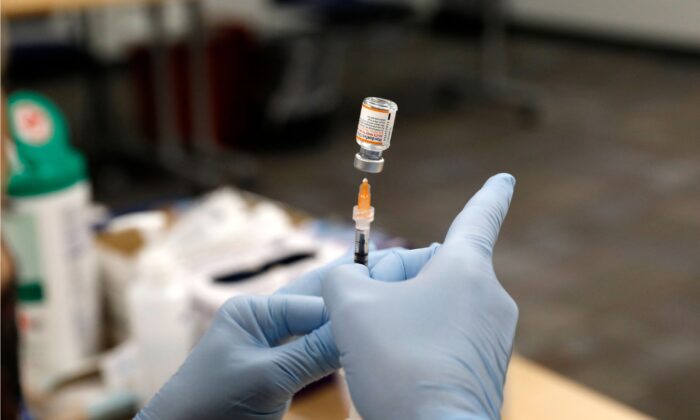 Over 600 Pfizer COVID-19 Vaccines Given in Clinic Were Stored Improperly: Connecticut Officials

Hundreds of individuals who received COVID-19 vaccines at a clinic in New Haven, Connecticut, need to receive another shot, officials said.

The reason why, said the New Haven Health Department on Feb. 11, is because vials of the Pfizer-BioNTech vaccine were improperly refrigerated before they were administered, reported the Hartford Courant.

“After consulting with Pfizer and the Connecticut Department of Public Health it was recommended that those who received the improperly stored Pfizer vaccine or booster get revaccinated as soon as they can,” Health Director Maritza Bond told the outlet. The doses were administered at the New Haven Health Department clinic at 54 Meadow Street between Dec. 25, 2021, and Feb. 7, 2022.

Pfizer officials told New Haven health officials that the improperly refrigerated doses could be less effective, according to the Courant.

“This issue was identified this week when the Health Department was conducting an inventory of our vaccines,” Mayor Justin Elicker said in a statement. “Following this notification, action was taken to investigate the issue and the director of health immediately reached out to the state Department of Public Health as well the vaccine manufacturer, Pfizer.”

Authorities told local Connecticut media that the mishap impacts upwards of 650 people. Officials said that about 22,000 doses of the Pfizer vaccine were administered before coming across the storage issue.

Those who were impacted by the storage mishap will be contacted by the city health department, Elicker, a Democrat, told the Hartford Courant. However, he said that anyone who received a shot between Dec. 25 and Feb. 7 at the New Haven Health Department on 54 Meadow Street should visit the city’s website.

“There’s specific directions about how long vaccines should be in a freezer versus put in the refrigerator and that timeline was not appropriately followed,” Elicker said.

Elicker added that a “lot the folks were receiving boosters” and most were being “fully vaccinated but there are (sic) a lot of evidence that boosters really help out, so we want to make sure, as quickly as possibly can, we provide a recommendation, where in other circumstances, this has also happened, is simply to get an additional dose,” Elicker said.

The Food and Drug Administration in May 2021 authorized “thawed” and “undiluted” vials of Pfizer’s vaccine to be stored between 35 degrees F to 46 degrees F for up to one month. Previously, the agency said that such vials could be stored for up to five days.