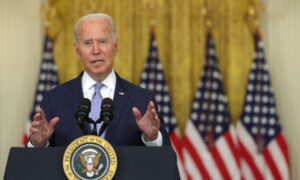 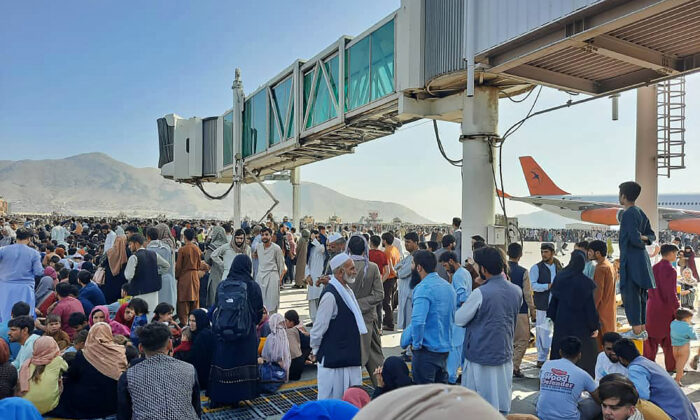 Afghans crowd at the tarmac of the airport in Kabul as they wait to flee Taliban control of Afghanistan after President Ashraf Ghani fled the country and conceded the insurgents had won the 20-year war on Aug. 16, 2021. (AFP via Getty Images)
International

Over 60 Nations Ask Taliban to Allow Foreigners, Afghans Safe Passage Out of Kabul

More than 60 countries issued a joint statement late on Sunday calling on the Taliban terrorist group to allow safe passage for foreign nationals and Afghans out of Kabul.

Citing the “deteriorating security situation” in Afghanistan, the nations said that those in positions of power and authority across Afghanistan “bear responsibility—and accountability—for the protection of human life and property, and for the immediate restoration of security and civil order.”

Afghans and international citizens who wish to depart must be allowed to do so, the nations’ statement said, adding that roads, airports, and border crossing must remain open, and that calm must be maintained.

“The Afghan people deserve to live in safety, security, and dignity.  We in the international community stand ready to assist them,” the joint statement distributed by the State Department stated.

Currently, Kabul’s Hamid Karzai airport, which is located five kilometers from the centre of the capital, is only accessible through Taliban checkpoints, The Guardian reported.

The Taliban declared the war in Afghanistan was over after insurgents took control of the presidential palace in Kabul as U.S.-led forces and allied nations scrambled on Monday to evacuate thousands of their citizens.

A further 1,000 troops were deployed in addition to the 5,000 already committed by the Pentagon to assist in evacuating American citizens as well as locally employed staff of the U.S. mission in Kabul, as the U.S. government said it would assume air traffic control to facilitate the departure of thousands of Americans.

The United States over the next 48 hours will “have expanded our security presence to nearly 6,000 troops, with a mission focused solely on facilitating these efforts and will be taking over air traffic control,” a joint statement from the State Department and Pentagon said.

The statement added that it will also accelerate the evacuation of thousands of Afghans eligible for U.S. Special Immigrant Visas.

Secretary of State Antony Blinken said on Twitter that the United States “joins the international community in affirming that Afghans and international citizens who wish to depart must be allowed to do so.”

A senior administration official told CNN that they expect President Joe Biden to address the nation sometime in the next few days about the situation in Afghanistan. Biden has been on summer vacation visit at Camp David and was originally scheduled to return to the White House later this week.

“Why is Joe Biden in hiding? He should immediately address the nation and answer for the catastrophic situation in Afghanistan. Conference calls between cabinet secretaries and senators don’t cut it in a crisis,” wrote Sen. Tom Cotton (R-Ark.), who served tours in Afghanistan in the U.S. Army, on Twitter.

Meanwhile, Blinken said on ABC’s “This Week” of the unfolding situation that the president had made a “hard decision” that it was time to end the war in Afghanistan for the United States, “to get out of the middle of a civil war in Afghanistan.”

“[T]here’s nothing that our strategic competitors around the world would like more than to see us bogged down in Afghanistan for another five, ten, or twenty years. That is not in the national interest,” he added.

Sen. Ted Cruz (R-Texas), member of the Senate Foreign Relations Committee, criticized the president in a statement on Aug. 13 for tearing up the former Trump administration’s efforts to negotiate an “orderly withdrawal on a fixed timetable with extensive support from regional actors.”

Former President Donald Trump signed a deal with the Taliban in February 2020 to withdraw U.S. troops by May 1. However, in April, Biden announced his plans to withdraw all U.S. troops from the country by Sept. 11.

“In Afghanistan, President Biden said he was putting his ‘trust’ in ‘the capacity of the Afghan military,’ and the result has been, again, an embarrassing spectacle, a diplomatic humiliation, and a national security catastrophe,” Cruz added.