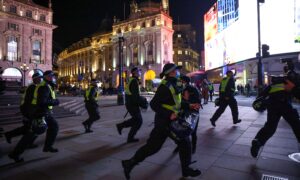 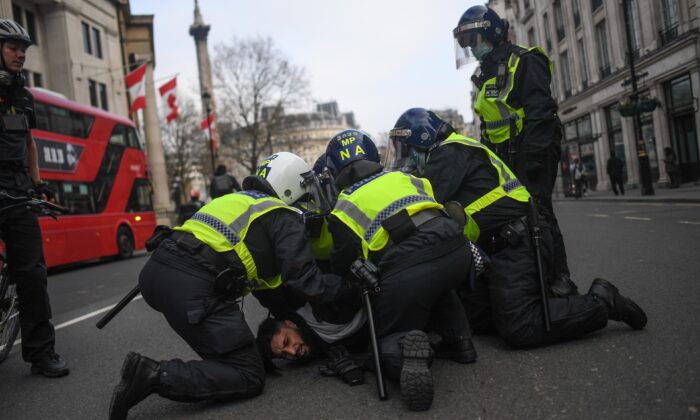 A man is seen being restrained by police during a protest in London, on Nov. 28, 2020. (Peter Summers/Getty Images)
UK

One hundred and fifty-five arrests have been made during anti-lockdown protests in central London, the Metropolitan Police said on Saturday.

The Met said the arrests were for offences including breaching lockdown rules, assaulting a police officer, and possession of drugs.

“Officers made a number of early interventions to prevent people from gathering and to urge people to go home. As part of this, coaches transporting protestors into the capital were intercepted and those who did not turn back and go home were either arrested or issued with fixed penalty notices,” the Met said in a statement.

Chief Superintendent Stuart Bell said it was a challenging day for the Met.

“On Friday, we made it very clear how we would police this event, warning those looking to attend that they risked facing enforcement action if they attended a gathering in London,” he said.

Today’s enforcement action is a direct result of those individuals deliberately breaking the law and at times, targeting our officers with aggression and causing disruption to the road network,” Bell added.

The protest was organised by Save Our Rights UK (SORUK), a self-described grassroots movement concerned with issues including government imposed lockdowns, media bias and censorship, and potential mandates of vaccines.

SORUK posted a video in the afternoon on Saturday, of one of its founding members Louise Creffield being arrested.

Police had issued a statement on Friday saying that protests are not allowed under CCP (Chinese Communist Party) virus regulations.

“The Met is urgently reminding those looking to attend that protest is not currently a permitted exemption to the prohibition on gatherings under the current coronavirus regulations,” police said in the statement.

“The Met has a proud history of facilitating protest. However, our city is in a critical fight against COVID-19 and we cannot allow gatherings to jeopardise the progress and sacrifices our communities have made in fighting this virus,” said Bell.

“That is why we will be taking action in relation to prohibited gatherings on the streets of London, including those related to protest across the capital this weekend. Our top priority is public safety and that is why we cannot allow individuals to break the law and put their health and the health of their friends, family, and the wider community at risk,” Bell added.

Civil rights campaigners Liberty and Big Brother Watch wrote to Bell (pdf), saying the Met was wrong to claim protest was not a permitted exemption.

The letter said that the law made a clear exemption for the organisation of gatherings by bodies including “a political body,” as long as required precautions had been taken.

“All state authorities have a duty to uphold and respect the rule of law. It is vitally important, particularly during a pandemic, that the law is clear and accessible to all and not misrepresented by law enforcement,” the letter reads.

The campaigners urged the Met to issue a correction to its statement and clarify the exemptions for gatherings.

The Home Office said that protests are not exempt from the gathering ban.

“In these unprecedented circumstances, any gathering risks spreading the disease, leading to more deaths, so it is vital we all play our part in controlling the virus,” a spokesperson told The Epoch Times in an email.

“People must follow the rules on meeting with others, which apply to all gatherings and therefore protests too. As they have done throughout the pandemic, the police and local authorities will engage, explain and encourage people to follow the rules before moving on to enforce the law.”

On Nov. 5, the Met arrested 190 anti-lockdown protesters for breaches of CCP virus restrictions.

A previous version of this article misstated the day SORUK posted a video. The video was posted on Saturday afternoon. The Epoch Times regrets the error.

This article has been updated on Nov. 30 with the response from the Home Office.