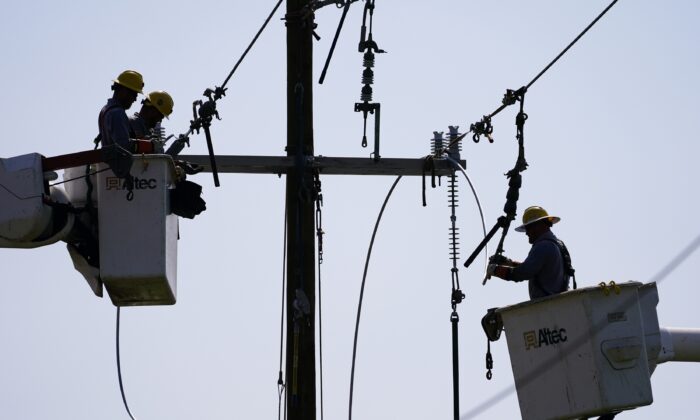 Crews work on power lines that were damaged in the aftermath of Hurricane Ida, in LaPlace, La., on Sept. 3, 2021. (Matt Slocum/AP Photo)
US News

Over 500,000 Louisiana Residents Still Without Power 8 Days After Hurricane Ida

Over half a million households and businesses remained without power in Louisiana on Sept. 6, eight days after Hurricane Ida struck the state.

Nearly 526,000 power outages in the state were reported, according to PowerOutage.us. That was down from approximately 597,391 outages a day earlier.

While crews with Entergy, Cleco, and other utility providers have been working around the clock to restore electricity, they have made little progress in some areas due to challenges such as flooding, snapped power poles, and downed transmission towers.

Over half of Entergy’s customers in Louisiana remained without power late on Sept. 5, the company said.

Some places are projected not to get power back until Sept. 8.

That includes large parts of New Orleans, where few residents have seen their electricity come back on after the storm struck on Aug. 29.

The storm downed eight high-voltage lines for New Orleans and elsewhere, and toppled a transmission tower that had withstood Hurricane Katrina 16 years prior, sending it into the Mississippi River.

“The level of destruction and devastation is unprecedented,” Entergy Louisiana President and CEO Phillip May told reporters on a call.

About a dozen elderly people in Louisiana have died since the storm in nursing homes, other long-term care facilities, and some who had been evacuated to a warehouse.

City officials conducting wellness checks at senior apartment complexes in New Orleans on Sept. 3 found that eight were unfit for residents to continue living there and ordered them closed, in addition to two other sites previously forced to shutter.

Five residents were found dead; those deaths are under investigation by the coroner’s office.

“It appears that management just left, and left those people. They were on their own with no lights, no communication, no air, just no way to do anything,” New Orleans Councilman Jay Cohen told WWL-TV.

Six other elderly residents died at a warehouse they were transported to after the storm.

The Louisiana Department of Health said on Sept. 4 that inspectors cleared the warehouse before the senior citizens were evacuated there but that “conditions clearly deteriorated following the storm.”

The owner of the nursing homes, Bob Dean, has defended what happened.