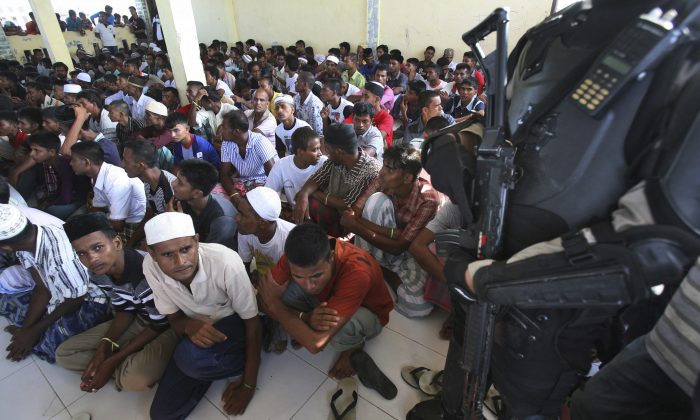 More than 500 Rohingya migrants from Burma fled a Malaysian detention center on April 20, with six being killed on a highway while fleeing, a Malaysian official said.

“A total of 362 detainees have been rearrested. The search for the remaining detainees is continuing,” Khairul said, according to The Malaysian Reserve.

Police said six detainees—two men, two women, one girl, and one boy—were killed in a road accident while attempting to cross a highway.

The Rohingya refugees came from Burma, also known as Myanmar, and have been denied citizenship since a Burmese citizenship law was enacted in 1982. Many have attempted to flee to Malaysia, Thailand, and Indonesia because of a military crackdown in Burma.

Malaysia, which doesn’t recognize refugee status, has long been a favored destination for the Rohingya fleeing persecution in Burma or refugee camps in Bangladesh.

According to the U.N. High Commissioner for Refugees (UNHCR) in Malaysia, there were approximately 179,000 registered refugees and asylum-seekers in the country as of February 2020, with more than 101,000 being Rohingya, Free Malaysia Today reported.

Since 2020, Malaysian authorities have placed thousands of Rohingya in overcrowded detention camps in a bid to halt the spread of COVID-19.

In March 2020, former Prime Minister Muhyiddin Yassin said the country could no longer take in Rohingya refugees from Burma, citing a struggling economy and dwindling resources as a result of the COVID-19 pandemic.

“We can no longer take more, as our resources and capacity are already stretched, compounded by the COVID-19 pandemic,” Muhyiddin said in a teleconference with the Association of Southeast Asian Nations (ASEAN).

He urged the UNHCR to speed up the resettlement of Rohingya in Malaysia to third countries and called for more efforts to combat the trafficking of Rohingya, who Muhyiddin said were increasingly at risk for exploitation by militants.