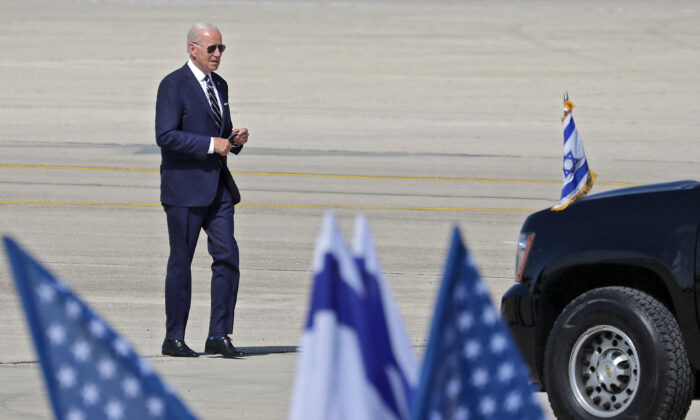 Over 50 Republicans Call on Biden to Take Cognitive Test

Some 50 House Republicans on Wednesday called on President Joe Biden to take a cognitive test amid questions about his fitness and mental acuity.

“We again write to you to express concern with your current cognitive state and to urge you to submit to a cognitive test immediately,” the letter (pdf) said. “We believe that, regardless of gender, age, or political party, all Presidents should follow the example set by former President Trump to document and demonstrate sound mental abilities.”

Making note of recent New York Times articles that have been critical of Biden’s abilities, “the increased scrutiny surrounding your cognitive state has been fueled by your recent public appearances,” they wrote.

Several gaffes made during Biden’s speeches were also cited by the lawmakers, including one in which Biden said that we must “keep alive the truth and honor of the Holocaust” during a July visit to Israel.

“These recent gaffes are not isolated incidents, as they are part of a larger history of your actions which exemplify cognitive decline,” it said. “The Alzheimer’s Association lists ‘changes in mood and personality,’ including being more ‘easily upset’ as one of ten signs of mental decline. You displayed this type of mood change during a cabinet meeting on January 24, 2022, when you apparently did not know your microphone was on after finishing your opening remarks.”

The White House and Biden, 79, have dismissed Jackson’s assertions as a politically motivated attack and a publicity stunt. Jackson previously served as physician to the president under the Obama and Trump administrations.

“I honestly don’t care about Ronny Jackson’s ‘look at me’ routine,” White House spokesman Andrew Bates told Fox News in February about Jackson’s claims about Biden’s mental state. “But if y’all get any mail from Nick Riviera please don’t be a stranger,” he said, making reference to the “Simpsons” character, Dr. Nick, who often pushes inappropriate medical treatments.

A poll by ABC News and The Washington Post in February (pdf) found that 54 percent of Americans don’t believe Biden has the “mental sharpness it takes to serve effectively as president.” About 40 percent believe Biden is mentally sharp enough to perform his duties.

While on the campaign trail in August 2020, Biden strongly suggested that he shouldn’t take a cognitive test and hasn’t taken one. It came as former President Donald Trump said that he should.

“No, I haven’t taken a test. Why the hell would I take a test? Come on, man,” Biden told CBS News at the time. “That’s like saying you, before you got in this program, you’re taking a test whether you’re taking cocaine or not. What do you think, huh? Are you a junkie?”