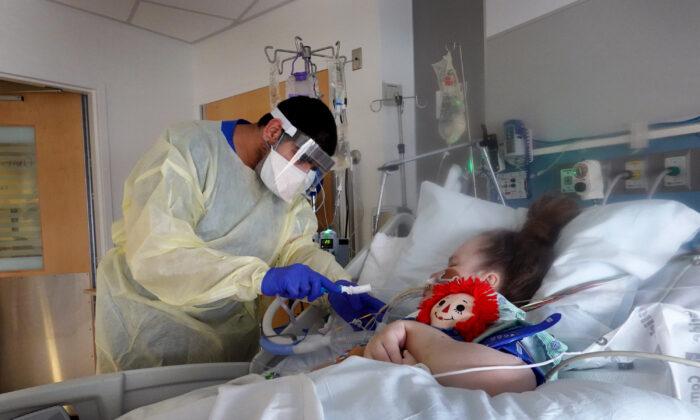 The vast majority of the COVID-19 hospitalizations in spring 2022 were among vaccinated people, according to a study from the U.S. Centers for Disease Control and Prevention (CDC).

From March 20 to May 31, there were 1,228 COVID-19-associated hospitalizations in the hospitals. Of those, a plurality—44.1 percent—were people who had received at least one booster dose of a COVID-19 vaccine on top of a primary series, including 45 patients with two or more boosters.

At the time, Omicron’s BA.2 subvariant was dominant in the United States. Omicron is a variant of the virus that causes COVID-19.

When Omicron’s BA.1 subvariant was dominant—between Dec. 19, 2021, and March 19—just 15.6 percent of the hospitalizations were boosted people, and 47 percent were unvaccinated.

And earlier in 2021, when the Delta variant was dominant, 69.4 percent of the hospitalizations were unvaccinated.

The study was published by the CDC in its quasi-journal (pdf).

The numbers align with an Epoch Times investigation that found vaccinated people have increasingly made up a majority of COVID-19 metrics in states across the country.

The researchers, which include CDC scientists and others, said the increase outlined in the study was likely tied to a number of factors, including waning immunity from vaccination, not being “up to date” with booster shots, and a jump in the number of older Americans who have gotten vaccinated.

“Up to date” means people have followed CDC vaccination recommendations, which advise getting a booster within months of completion of a primary series, and a second booster four months or more after that if the person is 50 years and older.

“These findings underscore the continued risk for COVID-19–associated hospitalization, particularly among unvaccinated persons and among older adults, irrespective of vaccination status,” the researchers said.

Most of the hospitalized patients were elderly and had at least one underlying health condition, according to the study.

While 12.4 percent of the patients in the Delta-era died in the hospital, just 7.5 percent did during BA.1 and 5.1 percent during BA.2.

The vaccination status of the deaths was not listed.