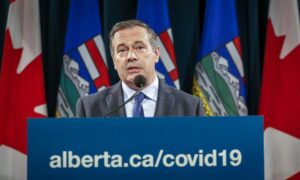 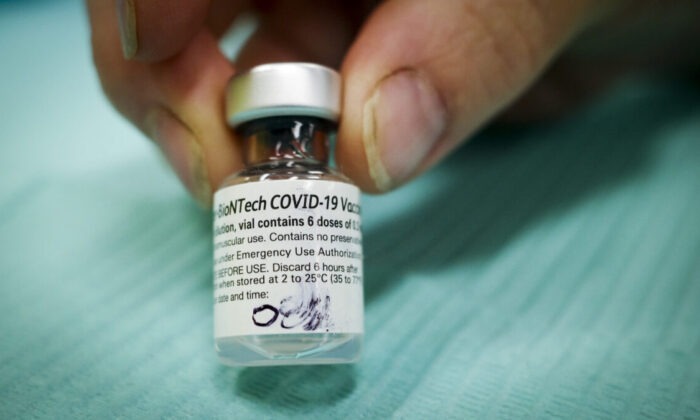 A vial of Pfizer-BioNTech COVID-19 vaccine is pictured at an Alberta Health Services vaccination clinic in Didsbury, Alta., on June 29, 2021. (The Canadian Press/Jeff McIntosh)
Canada

A group of over 3,500 Alberta health-care professionals including around 70 physicians is calling on the province to stop mandatory vaccination for health-sector workers, saying the mandate violates their Charter rights.

“We represent a wide range of vaccinated and unvaccinated health care professionals from multiple disciplines, who are deeply concerned about these mandatory vaccinations,” said the group referred to as Health Professionals United, in an open letter to Alberta Health Services (AHS) on Sept. 20.

AHS announced its vaccine mandate on Aug. 31, which requires all employees and contracted healthcare providers to be fully immunized by Oct. 31. Failure to do so will result in being placed on an unpaid leave of absence “for the period of time required to become fully immunized,” according to the AHS policy.

In its letter calling for an end to the mandate, the group questioned the efficacy of the COVID-19 vaccines over time and risks of side effects, among other arguments later disputed by Alberta’s minister of health. The group cited the findings of the U.S. Centers for Disease Control and Prevention (CDC) among several sources to back its arguments.

“These mRNA vaccines have NOT been proven to prevent disease uptake nor disease transmission supported by the CDC’s Morbidity and Mortality Weekly Report August 6, 2021,” the group said, citing the report’s findings that the group said showed “asymptomatic unvaccinated people have never been proven to be more infectious or transmit more disease than vaccinated individuals.”

The group also noted concerns about vaccine-related health effects, citing data reported by the U.S. vaccine injury database known as VAERS, saying that as of Aug. 27, 2021 “at least 650,077 people in the US have been injured and 13,911 people have died soon after the administration of the Covid vaccine.”

“These numbers could actually be 10-100x higher as a Harvard study showed only 1- 10% of all adverse events are actually recorded,” the letter said.

“The Harvard study’s findings are corroborated by our experience that the vast majority of temporally related adverse events are not being correlated and reported by healthcare workers.”

AHS didn’t reply to the group’s letter, but the province’s health minister Jason Copping responded, saying that the group’s claims are “misleading or incorrect.”

“The letter says COVID-19 vaccines have not been proven to prevent transmission of the virus. That’s patently misleading. You can still get sick and transmit the virus even if you’re fully vaccinated. But it’s far less likely—and if you do still get sick, it’s far less likely to be serious,” Copping said in a Sept. 29 statement, adding that “multiple studies have shown all of this.”

He cited several studies to refute the claims made in the group’s letter and said the group’s concerns of VAERS-reported deaths and injuries from the vaccine were “deeply misleading.”

“The data in VAERS has not been reviewed by medical professionals, so we don’t know how many of the reports in it may be duplicates or if the COVID-19 vaccine really played a role in a given report,” he said, adding data from Health Canada shows that of 16,090 individual reports of vaccine side effects in Canada (0.029 percent of all Canadian doses administered), 4,288 were considered serious (0.008 percent of all doses administered).

“My bigger concern is the message the letter sends to the 630,000 Albertans who are eligible to be vaccinated but haven’t yet done so,” wrote Copping in the letter.

“I think most of them are sincerely uncertain and looking for guidance, and I’m deeply concerned the letter could influence some of them to choose not to be vaccinated.”

The group responded to Copping in a letter on Oct. 4, questioning the quality of some of the studies the minister referenced and reiterated that the group is not opposed to vaccines in principle, and only objects to mandatory vaccination.

Carol Crosson, a constitutional lawyer who represents Health Professionals United, says the group is not “anti-vaxxer,” but “are for pro-choice in vaccinations.”

“These individuals … are a group that believes in choice,” she told The Epoch Times. “That’s their purpose—it’s to share a message about choice for medical treatments—after individuals have been fully informed, after they’re provided fully-informed consent.”

Crosson said that the vaccine mandates infringe upon section 7 of the Charter—the right to “life, liberty, and security” of the person.

“Life, liberty, and security has been interpreted by the courts to protect personal autonomy in regard to health care decisions,” she said. “That section of the Charter is precisely on point on this issue.”

The lawyer, who sent the response letter to Copping on behalf of the group, is also concerned that the blanket policy will risk losing health care workers and thereby putting more pressure on Alberta’s overburdened health system.

“At a time where our [health] system is struggling, the best foot forward may not be to enforce a measure that will result in the loss of many health care professionals,” she said.

She added that the group hopes to continue an open dialogue with Copping.

“We acknowledge the current pandemic and aim to work together to find solutions that do not compromise our medical ethics and infringe on our rights to choose what is administered into our bodies,” the group’s response letter said.

The Epoch Times reached out to Copping for comment but did not hear back by the time of publication.