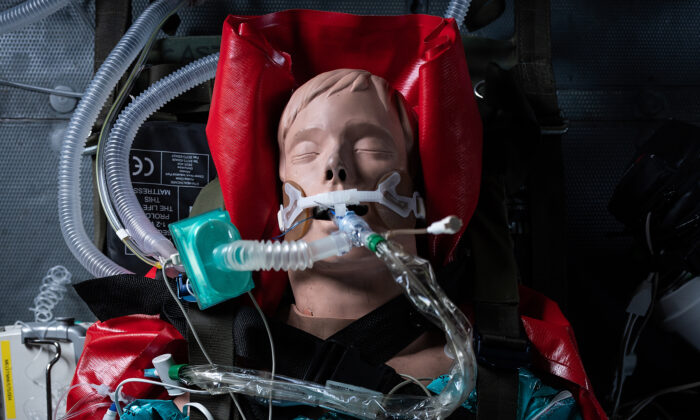 A mannequin wearing a ventilator in a file photograph. (Leon Neal/Getty Images)
Australia

Over 3,000 Ventilators Delivered to Australian Stockpile

Ventilator manufacturing company ResMed has delivered more than 3,000 ventilators to Australia’s national stockpile to assist in the federal government’s response to the CCP virus pandemic.

The San Diego-based company with Australian origins is known for making sleep apnea and ventilator machines. It has upped its production to meet an order for a total of 5,500 ventilators by the government.

They have now delivered more than half of the order. These will be added to the existing 4,400 units in the national stockpile.

In the coming months, a further 2,000 units are expected from Australian manufacturer Grey Innovation, through a deal worth $31 million (US$19.5 million).

Domestic manufacturing has become an increasing priority for the Australian government since the outbreak of the CCP (Chinese Communist Party) virus, commonly known as novel coronavirus..

While the ResMed products will be built in their Sydney facility under strict safety and cleanliness checks, the components are manufactured in China. ResMed assures customers the components made in China are safe for use.

In the United States, President Trump has also taken measures to protect its nation’s production of equipment by evoking the Defence Production Act. The act orders companies to bolster their efforts to make masks and ventilators in America.

“The Government has been working hard to secure supply and increase the domestic manufacture of ventilators as we respond to the COVID-19 crisis,” Andrews said.

“ResMed is a wonderful Aussie manufacturer that has stepped up in these unprecedented times to ramp up its production of ventilators.

“ResMed is a terrific example of the incredible manufacturing capacity that Australia has right here at home and shows how Aussie ingenuity can save lives,” she said.

“These additional ventilators will help to ensure we have sufficient supplies to meet the increased demand we expect in the coming months,” Minister Hunt said.

“Our national aim over the next few months is simple, suppress the virus, increase our testing and tracing, and slowly ease the restrictions,” he said.

ResMed President and Chief Operating Officer Rob Douglas said the company is proud to support the Australian government in its efforts to overcome the CCP virus spread.

“We will continue to work with the Australian Commonwealth, State and Territory governments, as well as with suppliers and governments from around the world, in a strong public-private partnership to support health care workers,” Douglas said.

The amount of people taken to hospital for COVID-19 treatment, for ICUs, and ventilators has dropped. As of April 19, a total of 184 people were in the hospital with COVID-19, 51 in ICU’s, and 33 on ventilation.