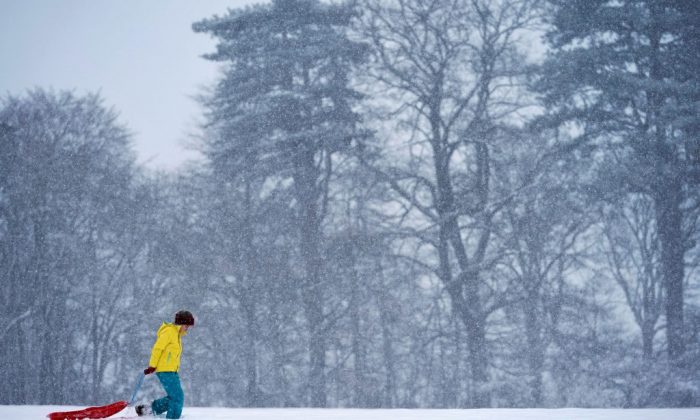 A youngster drags her sledge to the top of a snowy slope on Dec. 10, 2017 in Welsh Frankton, England. (Hugh Pinney/Getty Images)
UK

Hundreds of Schools Closed After Coldest Night of the Year

As Britain’s icy snap continues, hundreds of schools in England and Wales are staying closed for a second day.

Overnight temperatures plummeted to -13C (10.4F) in some parts of the country, making it the coldest night of the year so far.

Temperatures in Shawbury, Shropshire plunged to -13C, while Llysdinam in Powys, Wales was -10C. Many parts of the country were below freezing.

It's officially the coldest night of the year so far with a freezing minus 13 °C at Shawbury in Shropshire #brrrr pic.twitter.com/wMiM1rGv2E

Many pupils had a second day off school today with hundreds of schools shutting their gates in reaction to the sub-zero temperatures. Schools across the Midlands, Wales, and the South West have been affected.

Over 200 schools were listed to stay shut in Worcestershire, citing severe weather. Some schools said the approaches to the schools are still very icy and dangerous, and pathways leading up to the schools are covered with snow that had been cleared from the road. Meanwhile, Powys in Wales has shut around 85 schools.

Some parents, however, have criticised councils for closing schools in areas where the snowfall is minimal. One parent tweeted it was a “joke” that Caldicot School in Wales was shut, according to the BBC.

Monmouthshire Council’s cabinet member for children, Richard John, told the BBC: “A heavy fall of snow on Sunday was followed by a forecast of sub-zero temperatures and we’re aware that pupils, teachers, and other staff travel to school early in the morning when the roads are very busy, and today are likely to be dangerous.”

A yellow severe weather warning for ice is still in place on Tuesday and Wednesday.

It covers parts of Scotland and Wales, as well as several areas in England, including the Midlands, Yorkshire and Humber, London, the South East, East, South West, the North East, and North West.

The cold weather has left thousands without power and caused a third day of transport chaos.

There were 25,000 calls from motorists who had broken down on Monday, making it the busiest day of the year for the AA, the Telegraph reported.

Meanwhile, passengers at Heathrow face another day of disruptions. Dozens of flights were cancelled on Monday, and 16 have been shelved for Tuesday, according to the Standard.

On Monday, the Trades Union Congress called on employers not to force staff to make hazardous journeys into work.

TUC General Secretary Frances O’Grady said: “For many employees the bad weather will have made their commute virtually impossible, but thankfully many bosses now have ‘bad weather’ policies so staff know what is expected of them.”