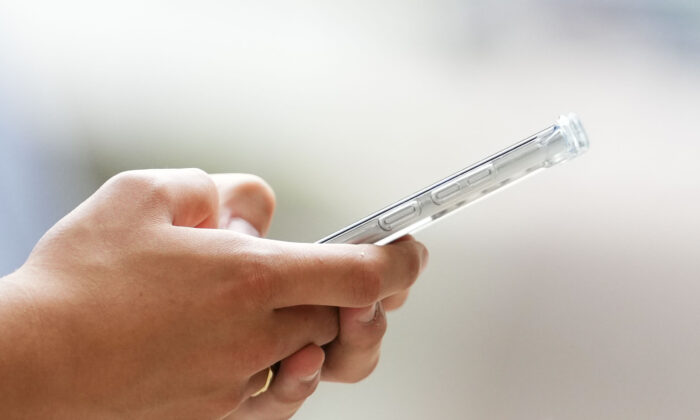 A person uses a cellphone in Ottawa on July 18, 2022. (The Canadian Press/Sean Kilpatrick)
Canada

Over 30% of Canadians Concerned About Cellphone Radiation, Federal Study Finds

Almost one-third of Canadians are worried that regular exposure to radiation-emitting wireless devices—such as cellphones and wi-fi routers—is harming their health, says a study from the Department of Health.

Surveying 5,000 Canadians from across the country, the study asked how concerned respondents were about “daily or regular usage of products like these that emit various forms of radiation,” to which 31 percent said that they were worried, according to Blacklock’s Reporter.

“Many expected the Government of Canada to continue to protect Canadians from the radiation risk,” said the health department’s research report titled “Attitudes, Knowledge And Expectations About Radiation Risk From Exposure To Radiation Emitting Devices.”

Over 50 percent of those surveyed said they used their cellphone “all the time” and often held the device against their ear.

“Overall most survey respondents were not particularly concerned about daily or regular use of products,” read the study.

The health department said it conducted the research in response to “misinformation and disinformation regarding the health risks posed by these technologies.”

Federal regulators have consistently said that radiation emitted from common wireless devices is not harmful to public health.

“If people follow manufacturers’ instructions and those devices respect the limits in Safety Code 6, I’m confident that they do not represent a risk to Canadians,” said Andrew Adams, then-director general of the health department’s environmental and radiation health sciences directorate, in his testimony before the House of Commons health committee in 2015.

When asked about possible adverse health effects of having multiple wireless devices in a single home, Adams said he is “not sure if any studies have been carried out to determine the electromagnetic field level in a home with several sources.”

Adams also said he is unsure if wireless devices like cellphones could cause cancer.

“I’m not a physician and so can’t comment from a strong knowledge base, but there are many types of cancers. How would they be associated with a particular cause?” he said.

“As a father of two children and a member of my own community I understand concerns with respect to cell towers,” said Art Thansandote, then-chief of the electromagnetics division at the health department’s radiation health sciences directorate, according to “Access to Information” records obtained by Blacklock’s Reporter.

“However as a scientist, I must take a look at the issue from a scientific point of view,” Thansandote continued. “There is no evidence that using a cellphone causes brain tumours.”

Thansandote also said that the worst level of radiation possible from cellphones is “thousands of times below those specified in science-based exposure standards.”

In 2014, then-Conservative MP Terrence Young introduced a private bill that, if passed, would’ve required manufacturers of a number of wireless devices to place warning labels on their product packages informing consumers of potential radiation risks.

Bill C-648, titled “An Act Respecting The Prevention Of Potential Health Risks From Radiofrequency Electromagnetic Radiation,” would’ve mandated a $100,000 fine for non-compliant manufacturers, but was dropped in 2015.