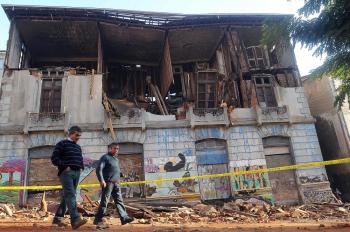 Two men walk past a building in Valparaiso that was heavily damaged by a huge 8.8-magnitude earthquake that rocked Chile on Feb. 27, 2010. (Felipe Gamboa/AFP/Getty Images)
International

Over 250 Significant Earthquakes Shook the World in Past 7 Days

Carlos Morales
View profile
Follow
biggersmaller
Print
CARACAS, Venezuela —In the past seven days there have been more than 258 recorded earthquakes of a magnitude higher than 4.5 on the Richter's scale. Chile alone has already experienced 81 aftershocks at a rate of 4 per hour since the first big earthquake of 8.8 struck on Saturday, Feb. 27. Tsunami alarms sounded across the world.

In response to expected tsunami generated by the Chile earthquake, the Japanese government had issued a red alert for the prefectures of Aomori, Iwate, and Miyagi, while the rest of the Japanese Pacific coast remained in orange alert. Fortunately, Japan reported waves of only about 4 feet Sunday afternoon on the wide coastal areas of its Pacific side.

More than 700 people have been reported dead so far since Chile's devastating earthquake of 8.8 on Saturday. Chile is now in a state of chaos as hundreds of people have been looting businesses and selling basic products like water and food at four times their cost. The authorities are currently trying to regulate the situation.

Chile's earthquake was predicted by a documentary from National Geographic in 2006, but was censored by the Chilean government due to fear that the news would cause panic.

In 1960, Chile suffered the biggest earthquake ever recorded in human history, one with a magnitude of 9.5 Richter. This terrible event caused thousands of deaths, and the country's terrain was changed forever.