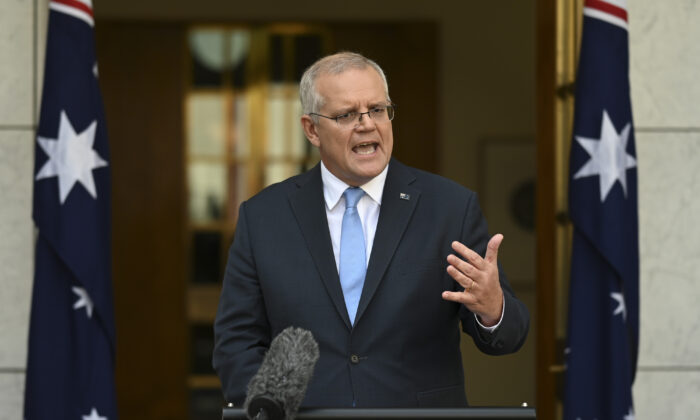 Over $200 Million Support Program for the Timber Industry: Australian PM

Australian Prime Minister Scott Morrison has announced new support for the country’s timber industry while emphasising the Coalition’s promise to plant one billion trees by 2030 is still achievable.

During his visit to a sawmill in northern Tasmania on April 14, the prime minister said the 2019-2020 Black Summer bushfires had impeded the progress and unveiled a support package worth nearly $220 million (US$164 million) for the forestry sector to achieve the goal.

“We didn’t set (the targets) because we thought they were easy. We set them because we believed they were important,” he told reporters in Launceston.

“We have to keep working to that despite the setbacks that we have had.”

However, the Labor party said it was another example of the Coalition breaking its promise, while opposition leader Anthony Albanese said the federal government only made announcements without delivering them.

“This is a prime minister who can’t be trusted to deliver on his commitments next term because he has shown this term that he can’t be trusted,” he told reporters in the NSW Hunter region.

So far, the federal government have planted around 4,300 hectares of trees, which is equal to just one percent of the target announced back in the 2019 federal election.

While campaigning in the electorate of Bass in Tasmania, the most marginal seat of the Coalition, Morrison pledged to provide the forestry industry with nearly $220 million for new technology investments and expansion.

He promised that the Liberal-Nationals coalition government would never support native forestry closure, and it would work with state governments to set up permanent sites for timber production.

“The pressures on the building industry and the uncertain international trade situation has made it clear that local wood products and local skills are critical,” Morrison said.

“Just ask any tradie who has been trying to get wood products.”

Under the promised support package, the federal government will spend $100 million establishing a new national institute for forest products innovation.

It also has a plan to build a central hub in Launceston and five centres in other regional areas.

Another $113 million will go toward improving the speed of adopting new wood processing technologies.

Meanwhile, the 2022/23 federal budget has allocated more than $90 million to the forestry sector to create new plantations and measures to stop illegal timber imports.

In a new development, the prime minister has called off his afternoon campaign after his security team got involved in a car accident when they were travelling between campaign events in Tasmania, reported Skynews.