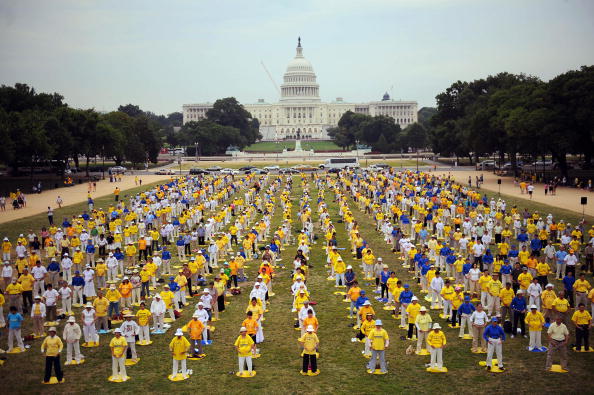 Hundreds of Falun Gong practitioners meditate to mark the 10th anniversary of start of the persecution in China at the National Mall in Washington, DC, on July 17, 2009. (Tim Sloan/AFP/Getty Images)
Chinese Regime

One of the largest civil rights movements is currently taking place around the world, with the goal of putting former Chinese regime head Jiang Zemin on trial for his brutal crimes against humanity. As of Dec. 8, over 2.6 million people from 31 countries have signed a petition calling on China’s judicial bodies to prosecute Jiang.

According to Minghui.org, a website dedicated to the reporting of first-hand information about the persecution of Falun Gong, over 200,000 Falun Gong practitioners, mostly living in China, have since mid-2015 filed criminal complaints with the regime’s highest court, the Supreme People’s Court, and highest prosecuting body, the Supreme People’s Procuratorate. They accuse Jiang of crimes against humanity and genocide.

On Dec. 10, International Human Rights Day, Theresa Chu, a Taiwanese human rights lawyer and coordinator of the petition drive in the Asia-Pacific region, announced the total tally of people around the world who supported bringing Jiang to justice.

“The genocide-like persecution of Falun Gong in China is still ongoing. The persecution continues to be severe and has not ended,” said Chu in an interview with the Asia-Pacific branch of New York-based Chinese-language broadcaster New Tang Dynasty Television (NTD).

“I believe this is the most ironic, most painful, and most brutal chapter in the history of human rights,” added Chu.

Chu also put the entire CCP apparatus on notice. “In the last 18 years, during which three different Chinese leaders have ruled China, countless people have been involved in planning, implementing, and executing the persecution policy. Their hands are tainted with blood,” Chu said. “They will never be able to avoid their responsibility in committing crimes against humanity, torture, and genocide under international criminal law.”

The World Organization to Investigate the Persecution of Falun Gong (WOIPFG), a New York-based nonprofit, has compiled a long list of CCP officials for their involvement in the persecution, including former security czar Zhou Yongkang; former Party secretary of Chongqing Bo Xilai; and Li Changchun, the former party secretary of Guangdong Province and the regime’s propaganda chief from 2002-2012.

Hu Ping, chief editor of Beijing Spring, a pro-democracy publication run from New York, said he supported the petition drive because it would awaken people’s awareness of the crimes committed by the Chinese regime and put pressure on them, in an interview with The Epoch Times.

Falun Gong, also known as Falun Dafa, is an ancient spiritual discipline that was introduced to the public in China in 1992. The discipline consists of slow meditative exercises and moral teachings based on the principles of truthfulness, compassion, and tolerance. Jiang believed that the popularity of Falun Gong—a state survey in 1999 estimated that there were more than 70 million adherents, and Falun Gong practitioners say that number topped 100 million—was a threat to the Party’s atheist ideology.

Jiang launched a bloody repression, establishing a Gestapo-like office created for the sole purpose of eradicating Falun Gong. The official press office for Falun Gong estimates that millions of practitioners have become victims of harassment, imprisonment, torture, brainwashing, forced labor, and other abuses. In addition, independent researchers report that Falun Gong practitioners are the principal source of organs for China’s extensive organ transplantation industry, killing the practitioners in the process.