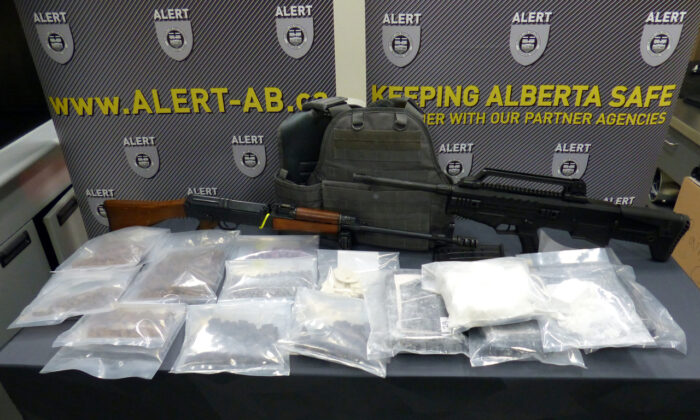 More than $1 million worth of drugs, cash, and firearms were seized in a drug bust in southwest Edmonton, Alb. on Feb. 23, 2022. (Alberta Law Enforcement Response Teams)
Canada

Over $1M Worth of Drugs, Cash Seized in Alberta Drug Bust

Over $1 million in drugs, guns, and cash have been seized during a drug bust in Edmonton, Alberta.

The Alberta Law Enforcement Response Teams (ALERT) said in a statement on March 16 that the seizure was part of a drug trafficking investigation that began in late 2021.

A 43-year-old man was arrested after ALERT Edmonton’s organized crime team searched homes in the Ermineskin and Terwillegar neighbourhoods on Feb. 23. The man is expected to be charged at a later date.

Michael Tucker, a spokesperson for ALERT said while only one suspect has been arrested, more are likely involved.

“Our investigation is ongoing and we will explore the possibility of making additional arrests. A seizure of this magnitude, we would be skeptical of just one person being involved—it takes people to fill varying roles and responsibilities,” he said.

With the help of the Edmonton Police Service, ALERT seized the following items:

“The drug trade is inherently violent. Firearms are used to instill fear, violence, and intimidation amongst rivals, but more often than not it is the community impacted,” said Blayne Eliuk, the acting inspector for ALERT Edmonton, on March 16.

ALERT was established in 2006 and is funded by the Alberta Government to combat organized and serious crime, with more than 400 municipal police and RCMP officers working to investigate drug trafficking, child exploitation, and gang violence.