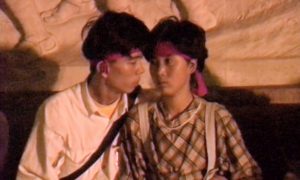 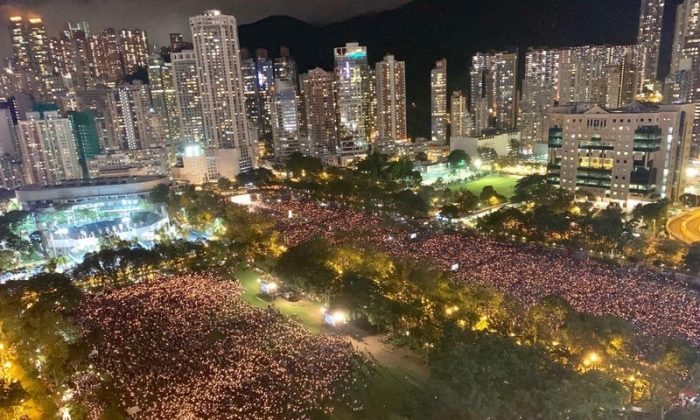 Tens of thousands of people gathered in Victoria Park in Hong Kong on the evening of June 4 to commemorate the 30th anniversary of the Tiananmen Square massacre, and to condemn the tyrannical Chinese communist regime.

Locals, students and even mainland Chinese attended the vigil.

In April 1989, thousands of pro-democracy students rallied on the streets of Beijing, calling for political and economic reforms and an end to government corruption.

Overnight on June 3 to June 4, Chinese soldiers and military vehicles charged into Tiananmen Square and killed demonstrators and onlookers en masse. The Chinese regime has never acknowledged the true events surrounding the Tiananmen massacre. It remains a taboo topic in China, with authorities banning all forms of commemoration inside the country, even today.

According to the organizer, Hong Kong Alliance in Support of Patriotic Democratic Movements of China, more than 180,000 people attended this year’s Tiananmen massacre vigil. Many participants will also join a rally on June 9 against Hong Kong’s new extradition law.

Some people arrived as early as 5 p.m. and crowds quickly filled the six football pitches of Victoria Park.

A group of young people then paid homage to the martyrs by laying a wreath at an iconic monument.

“We must remember the evilness of the regime and say no to a regime that has committed murder,” Richard Tsoi, Vice-Chairman of Hong Kong Alliance in Support of Patriotic Democratic Movements of China, said in his commemoration speech. “We will continue to condemn the atrocities of the Chinese regime and seek justice for you.”

Chu Yiu-ming, a 75-year-old Baptist pastor and veteran of China’s democracy movement, spoke on the stage as a survivor of the Tiananmen Square massacre. Chu and his fellow democratic activists escaped to Hong Kong shortly after the Tiananmen massacre. Chu told the audience that the then deputy consul of France in Hong Kong and then French president’s diplomatic adviser risked their careers by granting visas to many of the Chinese political refugees, thus saving their lives. He was deeply touched by their courage and conscience.

Chu said the candlelight vigil at Victoria Park reminds the victims that they are not alone, and the people of Hong Kong have not forgotten them. “We must take action with confidence and courage. Love, kindness and justice is our weapon when we fight against an immoral regime,” he said.

“Hong Kong’s June 4th candlelight vigil this year has set another record of mass movements in Hong Kong. It will become a great legacy in the history of human civilization,” Ho said.

He also called on attendees and Hong Kong residents to join a protest march on June 9 against the new extradition law. “It will undermine the rule of law in Hong Kong and affect Hong Kong people’s freedom and safety. For the future of Hong Kong, we must fight to the end,” he said.

In February this year, the Hong Kong government proposed a new law to amend extradition rules, which will allow suspects in Hong Kong to be sent to mainland China for trial. Tens of thousands of Hong Kong residents marched to the Legislative Council in April to protest the Fugitive Offenders Ordinance amendment bill, the largest demonstration in the city since the pro-democracy Umbrella Movement in 2014.

Many college and high school students joined the vigil this year.

College sophomores Winky and Emily told The Epoch Times that it is the first time they attended the Tiananmen massacre vigil because they want to join others to condemn the Chinese regime.

“The crackdown on Tiananmen Square is obviously wrong, and the Chinese regime still continues its wrongdoings by lying about it,” Winky said.

They are both worried about the proposed extradition law. “It will seriously affect our freedom, especially freedom of speech. And the Chinese regime will be able to intervene in Hong Kong’s internal affairs. That would be really bad,” Winky said.

Emily added that many foreign investors will likely withdraw their investments in Hong Kong if the new law is enacted. She is worried that it will hurt Hong Kong’s economy very badly.

A high school student surnamed Zhang came to the vigil for the third time. He told The Epoch Times that he felt this year’s vigil rally is more important than previous years for two reasons: “Because it is the 30th anniversary [of the Tiananmen Square Massacre], and the new extradition law will make it possible for the Chinese regime to punish Hong Kong residents using China’s laws.”

Some mainland Chinese came all the way to Hong Kong to join the rally and candlelight vigil in Victoria Park, including young people in their thirties.

A young man, surnamed Xiao, from Mianyang, Sichuan Province, arrived in the afternoon, hours before the candlelight vigil. Xiao told The Epoch Times that this was the first time he came to participate in Hong Kong’s Tiananmen vigil. He was only a year old at the time of the 1989 Tiananmen massacre. In 2013, he only learned about the true history of the Tiananmen Square massacre and other atrocities committed by the Chinese communist regime by using a special software to circumvent China’s internet blockage.

Xiao condemned the Chinese communist regime, saying that the crackdown was too inhumane. “Fang Zheng, a student protestor, had his legs crushed by a tank. He is crippled for the rest of his life.” Xiao said, “It’s a huge injustice for all those who have died or become permanently injured.”

While many demand the CCP to vindicate the Tiananmen student movement and Falun Gong, as well as admit and correct its mistakes, Xiao doesn’t have much faith in the CCP. “The only thing left for the CCP is to face its own demise. There are no other options.”

Xiao stressed that the Chinese regime is so evil that it must be put to an end. “I believe the CCP is in the process of dying and its days are numbered,” he said.

Xiao was also very concerned with Hong Kong’s new extradition law, which would allow suspects in Hong Kong to be sent to China for trial. He briefly shared a painful memory of his mother with The Epoch Times. Xiao’s mother was framed and falsely accused by Chinese authorities, and died in custody. When the family reported her death to the police, they insisted that it was an “accidental death” and dropped the case.

“There is no rule of law in China,” he said. “We must do everything we can to stop the extradition bill.”

Three other mainland Chinese participants came to Hong Kong together to join the vigil.

One of them is a journalist from Jiangsu Province. This is the third time he came to attend the vigil in Hong Kong. He spoke to The Epoch Times on the condition of anonymity.

He revealed that when former Chinese leader Jiang Zemin started the persecution of Falun Gong, he was a fresh college graduate and just started his journalism career.

“We were forced to produce fake news to defame Falun Gong. We can make up stories anyway we want, as long as it’s negative news about Falun Gong. There is no real news in China, only propaganda,” he said.

He also criticized the Chinese authorities for using face recognition and AI technologies to monitor its people. “They want to scare people. High-tech in the hands of the CCP is like an evil person armed with a sharp sword.”

Another mainland participant surnamed Zhang told The Epoch Times that although he was a little boy in 1989, he still had some memory of the incident. Ten years ago, he studied the Tiananmen massacre and the Cultural Revolution to learn more about China’s history.

“The annual vigil for Tiananmen massacre in Hong Kong in the past 30 years is a symbol of conscience,” Zhang said.

Zhang added that the CCP is like a withering tree or a person dying from cancer. “There is no cure. The CCP is simply going through its last struggle before it dies.”

The Epoch Times reporters Lin Yi and Liang Zhen contributed to this report.