Over 15,000 Gas Stations Out of Fuel Nationwide

Gas shortages ease in some states, but worsen in others 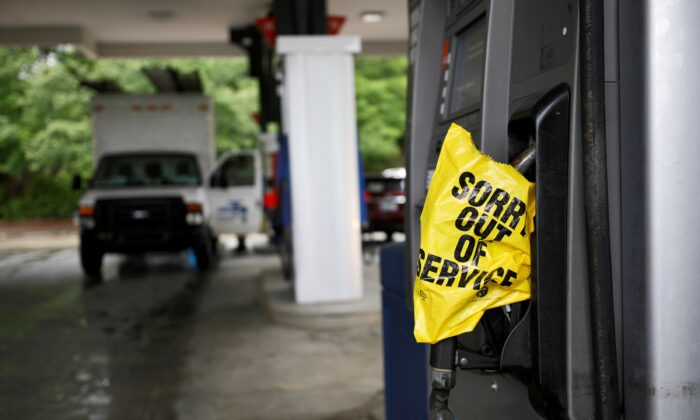 A bagged nozzle at a pump notifies motorists that it no longer has fuel after a cyberattack crippled the biggest fuel pipeline in the country, run by Colonial Pipeline, in Chapel Hill, N.C., on May 12, 2021. (Jonathan Drake/Reuters)
By Zachary Stieber

Gas shortages eased slightly overnight in some states but worsened in others as Colonial Pipeline works to bring one of the nation’s major fuel conduits back online.

More stations were out of gas in Florida, Maryland, South Carolina, Tennessee, and Mississippi early on May 13 compared to the night of May 12, according to GasBuddy.

In Florida, 30 percent of 7,564 stations were out of fuel as of 6 a.m. Central Time. In Maryland, 34 percent of the state’s 1,869 stations could no longer serve customers. More than half of South Carolina’s 3,084 stations ran out of gas, along with 34 percent of Tennessee’s stations. Seven percent of Mississippi’s stations are out of gas compared to 6 percent the night prior.

At the same time, shortages eased in several of the states most impacted by the current situations, including by 3 percent in North Carolina. About 7 in 10 stations in the worst-hit state, which has 5,373 stations, remain out of gas, according to GasBuddy, an app that tracks prices and availability.

All told, more than 15,630 stations were out of gas in the Eastern United States, according to an Epoch Times review of GasBuddy data.

Colonial Pipeline’s 5,500 mile-plus pipeline, which stretches from Texas to New Jersey, was taken offline last week as a defensive measure to the company being cyberattacked by a criminal ring called DarkSide, federal authorities and the company have stated. Colonial on May 12 initiated the restart of the pipeline but warned that it will take several days for operations to return to normal.

“This should mean things will return to normal by the end of the weekend,” she said in a statement.

Supply remained adequate in the wake of the attack, but transportation issues stemming from a dearth of fuel truck drivers and a run on gas from panicked consumers led to shortages and rising prices, experts have said.

The pipeline coming back should alleviate some consumer concern, Phil Flynn, an energy market analyst with the Price Futures Group, told The Epoch Times.

“Reports that the pipeline’s restarted is going to take away some of the panic,” he said.

Tom Kloza, founder of the Oil Price Information Service, said Colonial’s message “means that the deluge of rain is over, but the ‘river crest’ of station outages probably arrives tomorrow or Friday.”

“Friday is always the busiest day for purchasing gasoline,” he wrote in a tweet.

But people in the worst-hit states, such as the Carolinas, Virginia, and Georgia, could see up to 14 days of trouble buying fuel, Patrick De Haan, an analyst with GasBuddy, wrote on Twitter.

The problems will end sooner in other states, he predicted.

Still, the first step to restoring the pipeline’s operations, in addition to exports that are coming in from Europe, might ultimately turn a shortage into the country having extra gas, according to Flynn.

DarkSide infiltrated Colonial’s network with ransomware, technology that enables hackers to hold hostage information in return for payment. Colonial hasn’t said whether it paid the ransom. The company said the hackers didn’t reach core parts of its network but that it took certain areas offline in response to the breach, leading to the pipeline going offline.

Federal officials, including members of Congress, are studying how to prevent such attacks in the future against critical infrastructure. A bipartisan group in the House introduced a bill on May 12 to send money to state and local governments to bolster their computer security.

President Joe Biden, meanwhile, signed an executive order that calls for the federal government “to bear the full scope of its authorities and resources to protect and secure its computer systems, whether they are cloud-based, on-premises, or hybrid” while working with private companies to protect their systems.

Flynn sees the need for a national effort to respond to the attack.

“I would say it’s the moral equivalent of war. We have to do whatever we can to stop this.”