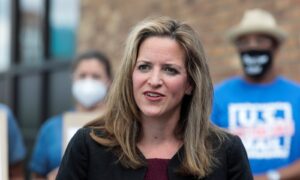 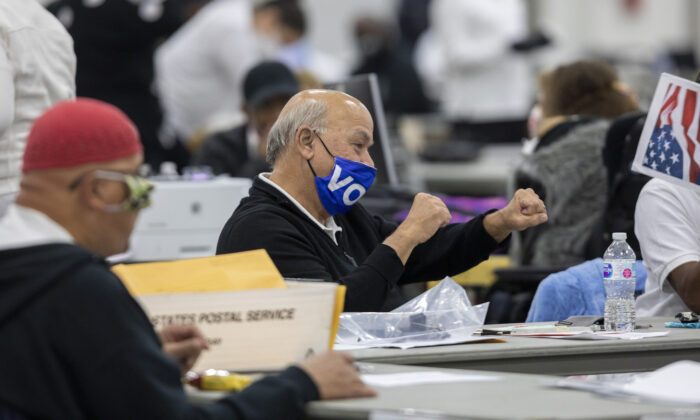 A worker with the Detroit Department of Elections celebrates after hearing the nearly final number of 167,000 absentee ballots that were counted is announced over the loudspeaker at the Central Counting Board in the TCF Center in Detroit, Mich., on Nov. 4. (Elaine Cromie/Getty Images)
Michigan

Over 1,400 Votes Changed During School Board Election in Michigan: Forensics Company Report

Allied Security Operations Group, which carried out a forensic audit of voting machines in Michigan’s Antrim County, claimed in a Monday report that more than 1,400 votes changed when they evaluated a Dominion ImageCast Precinct machine for possible hardware problems in a small town.

“This is the most preliminary report of serious election fraud indicators. In comparing the numbers on both rolls, we estimate 1,474 votes changed across the two rolls, between the first and the second time the exact same ballots were run through the County Clerk’s vote counting machine—which is almost the same number of voters that voted in total,” the group said when they evaluated two tape rolls in Central Lake Township.

“There were incremental changes throughout the rolls with some significant adjustments between the 2 rolls that were reviewed. This demonstrates conclusively that votes can be and were changed during the second machine count after the software update. That should be impossible especially at such a high percentage to total votes cast,” the group wrote.

“For the School Board Member for Central Lake Schools, there were 742 votes added to this vote total. Since multiple people were elected, this did not change the result of both candidates being elected, but one does see a change in who had most votes. If it were a single-person election this would have changed the outcome and demonstrates conclusively that votes can be and were changed during the second machine counting. That should be impossible,” Allied said.

And for School Board Member for Ellsworth Schools, Allied said 657 votes were “removed from this election,” adding, “In this case, only 3 people who were eligible to vote actually voted. Since there were 2 votes allowed for each voter to cast,” while the recount “correctly shows 6 votes.”

The report then showed two images showing the “School Board Member for Ellsworth Schools” vote totals for the Nov. 3 election and the Michigan recount that started Nov. 6. During the recount, it showed six total votes—but on Election Night, there were 663 total votes, according to Allied.

The company carried out the forensic audit on behalf of plaintiff William Bailey. Judge Kevin Elsenheimer on Monday allowed Allied Security to release its report.

Dominion Voting Systems has repeatedly said that its machines cannot switch votes from one candidate or proposition to another.

“All Dominion systems are capable of producing paper records and are 100 percent auditable, with testing, reviews, audits, and recounts subject to oversight and verification by all political parties,” the firm says on its website. “Baseless claims about the integrity of the system or the accuracy of the results have been dismissed by election authorities, subject matter experts and third-party fact-checkers.”

Michigan Elections Director Jonathan Brater, in a court filing, said Monday’s Allied Security report “makes a series of unsupported conclusions, ascribes motives of fraud and obfuscation to processes that are easily explained as routine election procedures or error corrections, and suggests without explanation that elements of election software not used in Michigan are somehow responsible for tabulation or reporting errors that are either nonexistent or easily explained,” reported the Detroit Free Press.

The Epoch Times has requested a comment from Dominion, Antrim County, and the Michigan Secretary of State’s office. Previously, Secretary of State Jocelyn Benson said that a combination of a software update and human error led to reportedly more than 6,000 votes being switched from President Donald Trump to Democratic nominee Joe Biden—before it was corrected.