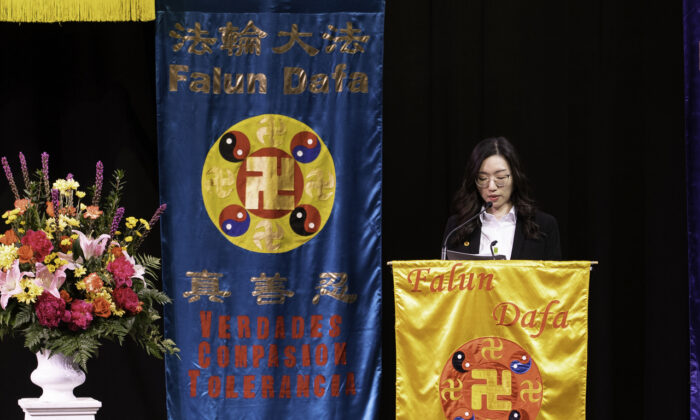 Falun Dafa adherents from across Canada attended a conference in Toronto on July 16 to hear speakers talking about their spiritual journeys, with some sharing about having to flee their homeland of China to avoid persecution for their beliefs.

Over 1,300 practitioners of Falun Dafa, a Chinese spiritual self-improvement practice that involves five meditative exercises and moral teachings based on the tenets of “Truthfulness, Compassion, Forbearance,” gathered at the Metro Toronto Convention Centre for the annual all-day conference. The gathering was the first large-scale in-person conference since 2019 due to the pandemic.

Called a “Fahui” in Chinese, the conference provided an opportunity for adherents to share how they have applied the practice’s teachings to their daily lives and reach higher moral standards through a process of self-cultivation and reflection.

One practitioner, Mr. Bui, shared how he no longer suffered from a herniated disc in his lower back after he took up the practice. He said Falun Dafa also helped him let go of pursuing fame and personal gain, and filled him with joy knowing he is on a path of self-improvement. Thanks to the practice, he said he is able to take conflicts lightly, act selflessly, and put others’ well-being before his own.

Another practitioner, Mr. Li, shared how while he was doing volunteer coordination work, he ran into different difficulties, and realized that he had to look internally to rectify his own shortcomings rather than blaming superficial reasons. Through cultivation, he said he worked on letting go of his notions such as showing off or wanting to prove himself, helping him better advance forward in his work and cultivation.

Made public in China in 1992, Falun Dafa, also known as Falun Gong, quickly gained widespread popularity across the country as word spread about its benefits to people’s physical, mental, and spiritual health. By 1999, it had attracted between 70 million to 100 million adherent in China alone, according to official estimates.

However, Jiang Zemin, then-leader of the Chinese Communist Party (CCP), perceived Falun Dafa’s popularity as a threat to the regime’s authoritarian rule and on July 20, 1999, launched a persecution campaign aimed at eradicating it. The campaign has resulted in countless adherents being illegally imprisoned and subjected to forced labour, torture, and death. They are also targeted for organ harvesting, where their vital organs are forcibly removed to supply China’s lucrative organ transplant industry.

One notable aspect of the CCP’s persecution campaign has been the use of propaganda tools to spread disinformation about the spiritual discipline and its adherents in order to demonize them.

Outside China, Falun Dafa practitioners all over the world have worked to raise awareness of this human rights crime since July 1999.

The CCP’s persecution not only targets Falun Gong adherents, but also their loved ones. Film director Mr. Fang shared how before he started practising, he had to escape from Shanghai in early January 2019 after China’s National Security Bureau tried to arrest him for visiting his then-girlfriend, an adherent of the practice, in Toronto.

Fang said while he managed to get out of the country, he was “shaken” after having to run from the police. He also noted that he dared not contact his family members back in China so as not to jeopardize their safety.

“My journey to Canada clearly showed me the brutal nature of the CCP and its persecution of Falun Gong,” he said.