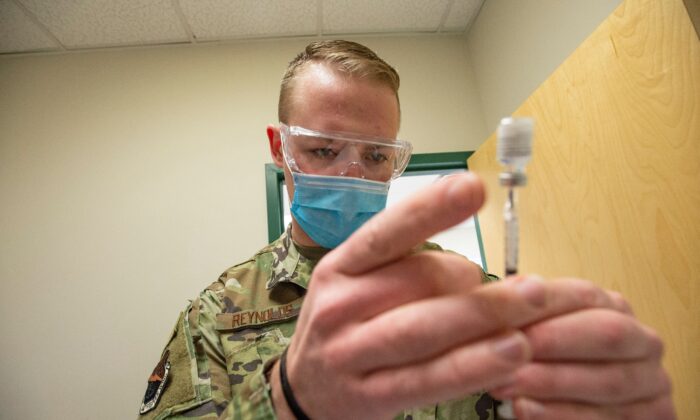 A U.S. Air Force staff sergeant handles a Pfizer COVID-19 vaccine at a clinic in Massachusetts on Feb. 16, 2021. (Joseph Prezioso/AFP via Getty Images)
By Zachary Stieber

The Air Force could lose thousands of troops in the coming weeks as over 11,000 active-duty personnel remain without a COVID-19 vaccine, just days before the deadline to get one.

Some 96.4 percent of active-duty airmen were partially or fully vaccinated as of Oct. 25, the branch said in its latest vaccination update.

That means approximately 11,462 airmen have not begun a vaccination program before the Nov. 2 deadline to become fully vaccinated.

Another nearly 12,000 reserve personnel or Space Force members remain unvaccinated, according to data released by the Air Force. Reserves have until Dec. 2 to become fully vaccinated.

Fully vaccinated means getting a vaccination regimen and then at least two weeks elapsing. Members who haven’t yet started a program cannot come into compliance with the mandate.

“We don’t anticipate we will be to a 100 percent vaccination rate,” an Air Force spokeswoman told Defense One this week.

Any troops who don’t get a vaccine by the deadline and have not received or is not in the process of seeking a religious or medical exemption will be deemed in violation of a lawful order and subject to discipline under Article 92 of the Uniform Code of Military Justice.

They could be court-martialed or face other disciplinary measures.

Each branch head decided separately on mandate details, including deadlines.

The Air Force has the earliest deadlines for active-duty troops and reserves.

An Air Force spokesperson told The Epoch Times earlier this month that the deadlines would not be pushed back.

Hundreds of thousands of troops across the military weren’t vaccinated in the middle of October.

As of Oct. 27, over 381,000 troops remain unvaccinated, according to an analysis of Pentagon data. The vast majority, or nearly 320,000, are in the Army, the Army reserve, or the Army National Guard.

Army reserves have the most lenient deadline, by far. They have until June 30, 2022, to become fully vaccinated. Active-duty sailors and Marines have until Nov. 28, while active-duty soldiers have until Dec. 15.

It remains unclear how many religious and medical exemptions have been approved. The Pentagon previously referred requests for numbers to each branch. The Army didn’t respond to a query and the Navy declined to comment. The Marines said it had not started approving any religious accommodation requests while declining to speak about medical exemptions. The Air Force told The Epoch Times earlier this month it is not tracking exemption requests and therefore could not say how many were approved, if any.

The Air Force told news outlets this week it would start releasing approved exemption numbers after the deadline.

Pentagon spokesman John Kirby on Wednesday declined to directly address complaints from some sailors who said that leaders told them their religious exemption applications were going to be denied.

“I don’t have any direct knowledge of a situation where a member of the military was told by his or her leadership, ‘hey, go ahead and apply, but you’re going to get denied,'” he told reporters in Washington. “I go back to what the secretary expects, that there is there’s an exemption policy been in place well, before the COVID vaccine, so it’s not new. And his expectation is that if members of the military want to apply for one that they should be able to. And they should be able to make their case. And the leadership should follow the same process for that exemption request as they would for any other.”