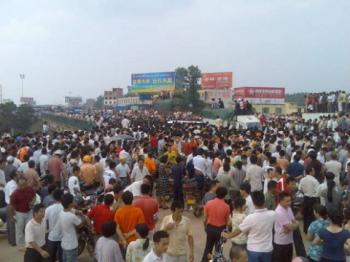 More than 10,000 people protested on the street in Nankang, Jiangxi Province. The protest paralyzed the Nankang segment of the Ganyue Highway. (The Epoch Times)
China

Over 10,000 Protest In Jiangxi Province Against Furniture Tax

Over 10,000 angry people in Nankang City of Jiangxi Province protested on the street and overturned a dozen police cars, paralyzing the Nankang section of the Ganyue Highway. They were protesting a proposed new furniture tax plan.

Furniture is the cornerstone industry for Nankang. According to authorities, Nankang City began to reorganize the local furniture industry at the beginning of June. A new tax collection and management system was scheduled to be implemented on June 15. The authorities claimed that the protest resulted from some furniture store owners’ misunderstanding of the new tax plan.

Local people said that the Nankang City Forestry Administration raised the price for furniture and lumber from 400 to 500 yuan (US$58.52 to $73.16) per truckload to 200 yuan (US$29.26) per cubic meter on June 1. This caused a substantial increase in transportation costs, and prompted the Nankang Logistics Association to call all local distributors to a meeting. Now all distributors have stopped making deliveries.

At approximately 10 a.m. on June 15, more than 10,000 people gathered in the industrial park alongside Highway 105 and in front of City Hall in Nankang City. They clashed with the police and overturned about 10 police cars. In the afternoon, as police cleared traffic for highway 105, protesters moved to the Nankang exit of the Ganyue Highway and overturned several more police cars.

A witness said, “Fourteen police cars were overturned by Nankang people, I personally witnessed 9 of them being overturned.”

Radio Free Asia reported that several demonstrators were arrested during the clash. People dispersed gradually, but by 9 p.m. there were still two or three thousand onlookers.

Upon huge pressure from the protesting people, the Nankang City Committee and City Hall announced on the afternoon of June 15 that the execution of the furniture tax plan that was scheduled to be implemented on that day would be canceled.