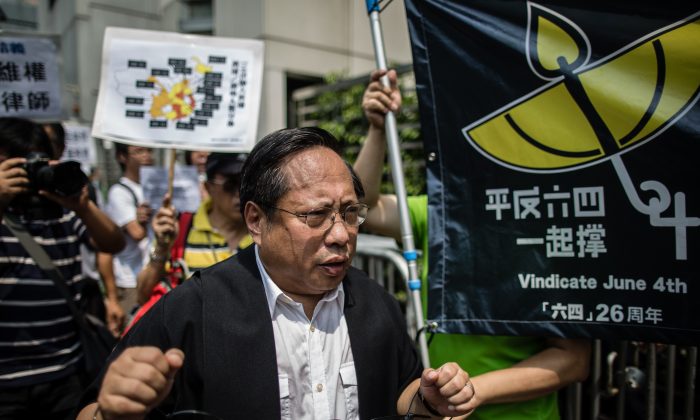 Hong Kong Democratic Party's Albert Ho (C) wears mock handcuffs as he attends a protest in Hong Kong on July 12, 2015, after at least 50 Chinese human rights lawyers and activists were detained or questioned in recent days in an "unprecedented" police swoop, rights groups said on July 11, with around 20 still feared to be held. The scale of the clampdown on the legal profession began to emerge when a friend of lawyers and staff at a single Beijing law firm known for its human rights casework said at least five had been detained in the last couple of days. (Anthony Wallace/AFP/Getty Images)
China

Six months after a sudden series of arrests of human rights lawyers and activists in China, a group of nongovernment organizations and activists have called on the Chinese authorities to release the individuals who are still detained.

The letter was cosigned by 106 NGOs from around the world and made available on the website of the Human Rights Campaign in China.

The letter says that the crackdown on rights activists last July makes a mockery of recent Party policy pronouncements that China would be “administered … in accordance with the law.”

Depriving lawyers themselves of their human rights will ensure that those they seek to defend also find no protection from state power, the letter indicated.

The July crackdown is the largest suppression of rights lawyers since 2003. At least 316 lawyers, assistants, rights activists, and family members have been incriminated, put under house arrest, criminally detained, or otherwise arrested or disappeared. Propaganda organs have also attempted to discredit the activists and their families, claiming they somehow act at the behest of foreign forces, who are never identified.