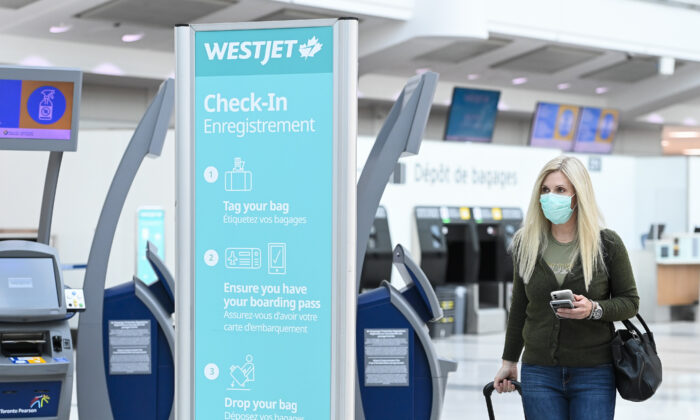 A woman walks through check in at WestJet at Pearson International airport during the COVID-19 pandemic in Toronto on Oct. 14, 2020. (The Canadian Press/Nathan Denette)
Canada

A group of more than 100 WestJet employees is taking legal action against the airline and the federal government over the mandatory COVID-19 vaccine policies for airline workers.

The group, comprised of active and inactive pilots, flight attendants, and customer service agents, said in a statement that they were “negatively impacted” by the mandates, such as being placed on unpaid leave, forced into early retirement, or being terminated.

“Our objection lies in the coercion, discipline, and denial of informed consent used to achieve the government’s goals of mass vaccination. Achieving informed consent under such a heinous act of forced compliance is not only unethical and unconstitutional, it is un-Canadian,” the statement reads.

The group also said some of its members have suffered from vaccine injuries.

The statement said more evidence is emerging to support the arguments of those who chose not to receive a COVID-19 vaccine, pointing to a U.S. court order that requires the Food and Drug Administration (FDA) to release 55,000 pages of data each month that was used to licence the Pfizer and BioNTech COVID-19 vaccines in the United States.

“As this data release continues to unfold, it is abundantly clear that a great deal of scientific information was never communicated to the public,” the group said.

“While we are reluctant to make accusations against any particular organization, it is indisputable that the fundamental hallmarks of informed consent were never achieved: the voluntary nature of a decision and disclosure of information.”

The group said it has secured legal assistance from lawyer Leighton Grey, of Grey Wowk Spencer LLP, who has filed similar legal challenges against other major corporations and the government.

“Although it’s too soon to declare a victory in any particular case, early progress in those cases has shown promising results,” said the statement.

Grey told the Western Standard that a “cease-and-desist” letter—a document sent to an individual or business demanding that it stop an alleged illegal activity—has been sent to WestJet. He also said he and his clients are working on drafting a lawsuit.

The Epoch Times reached out to Grey for further comment but didn’t hear back by publication time.

In a statement released last October, WestJet said it was proud that 98 percent of its staffers had expressed their intention to be fully vaccinated, and that the company and its budget subsidiary Swoop were committed to becoming “fully vaccinated airlines.”

The group of WestJet employees has launched a donation drive on GiveSendGo to finance its legal battle, with a goal of raising $25,000. The campaign had raised close to $1,960 as of July 6.

The Epoch Times reached out to WestJet for comment on the lawsuit but didn’t hear back by publication time.

Isaac Teo and The Canadian Press contributed to this article