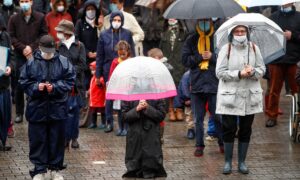 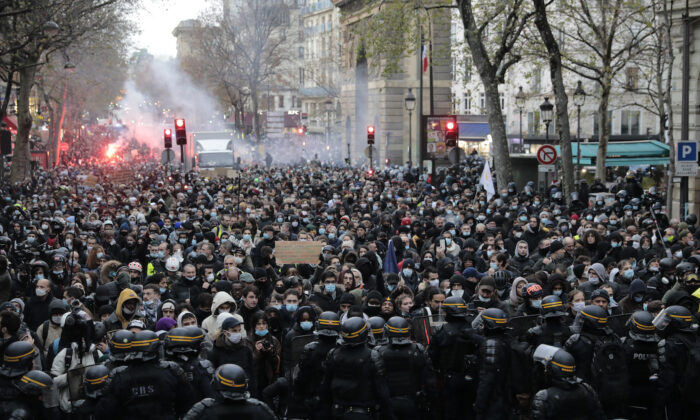 Demonstrators are blocked by police officers during a protest against a proposed bill in Paris, France, on Dec. 12, 2020. (Lewis Joly/AP Photo)
Europe

PARIS—Paris police took more than 100 people into custody at what quickly became a tense and sometimes ill-tempered protest Saturday against proposed security laws that citizens say will encroach on their civil liberties, with officers wading into the crowds of several thousand to haul away suspected trouble-makers.

Police targeted protesters they suspected might use violence, like those who vandalized stores and vehicles and attacked officers at previous demonstrations last week amid a mostly peaceful protest.

Paris police reported at least 107 arrests. Long lines of riot officers and police vehicles with blue lights flashing escorted Saturday’s march through rain-slickened streets in Paris. They hemmed in protesters, seeking to prevent the flare-up of violence that marked many previous demonstrations.

A police water cannon doused demonstrators at the end of the march, as night fell.

Marchers were protesting against a proposed security law that has sparked successive weekends of demonstrations and against a draft law aimed at combating Islamist radicalism.

The measure most contested in French President Emmanuel Macron’s security bill is that it could make it more difficult to film police officers. It aims to outlaw the publication of images with intent to cause harm to police. Critics fear it could erode media freedom and make it more difficult to expose police brutality. The provision caused such an uproar that the government has decided to rewrite it.

Slogans on placards carried by marchers in Paris said “I will never stop filming” and “Camera equals mutilation?”

There were also protests in other cities. In Lyon, in the southeast, authorities reported five arrests among people they said attacked police and sought to loot shops.