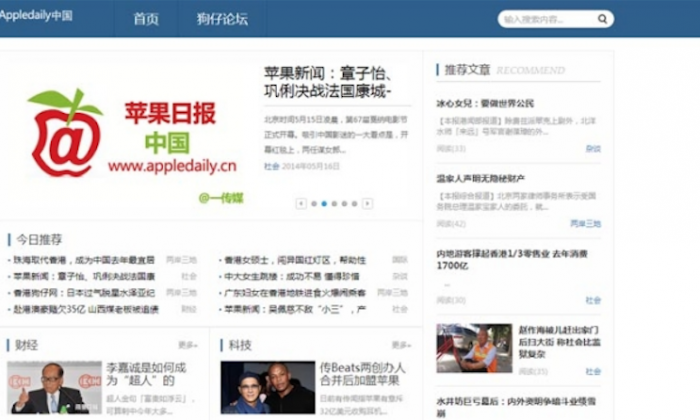 A newspaper that has been a vocal cheerleader for the push in Hong Kong for democratic elections recently discovered that a clone website using its name and logo has appeared in mainland China.

Any mainland readers who want to know what Apple Daily has to say about the just-completed referendum for universal suffrage, or the July 1 march for democracy, or the upcoming civil disobedience movement Occupy Central, will be offered an article by AppleDaily.cn about Communist Party leader Xi Jinping’s expansive classical learning.

Apple Daily is one of the most popular newspapers in Hong Kong and Taiwan, and is known as an outspoken voice in favor of human rights and democracy. The founder of the newspaper chain, Jimmy Lai, is also unapologetic in his opposition to the Chinese Communist Party. His websites are blocked in China.

Appledaily.cn, however, has been online and publishing news for over a week now. Its logo imitates that of the real Apple Daily, is published in simplified Chinese characters used on the mainland, and is accessible from the mainland.

“Apple Daily, which is called a viperous beast and is blocked by the Chinese authorities, now has a knockoff website!” announced Apple Daily’s (real) Taiwanese version, in a brief article about the development, on June 26.

The Apple Daily clone came to light during a weeklong referendum being held in Hong Kong that will help decide the future of popular governance in the city-state, and also days before July 1, an annual march in defense of Hong Kong’s autonomy.

Given that many Chinese Internet users are looking for information about Hong Kong at this time, the site may have been created to serve as a diversion and prevent them from seeing actual news about developments in Hong Kong.

Hong Kong Internet users spotted the fakery right away: despite the characteristic red apple with green stem, the “No. 1 Media” slogan, and the reproduction of mainly entertainment news reports from the real website, something didn’t seem right.

For instance, the real Apple Daily would not likely publish an article titled “Why Xi Jinping Loves to Quote From Classical Literature,” praising Communist Party leader Xi Jinping’s deep learning in the classics. The report generously quotes from People’s Daily, the mouthpiece of the Communist Party, and Xinhua, the official news agency of the Chinese regime.

But pure propaganda would likely not be convincing. Apple Daily China also carries reports remarking on corruption in China, and other pieces in support of protests against the proposal to build a chemical plant in the city of Maoming, Guangdong Province.

Nevertheless, the overall editorial thrust of Apple Daily China is clear: lots of light news and entertainment gossip, with a dose of pro-regime propaganda.

The creators of Apple Daily China also seem to have expanded their activities to Sina Weibo, the Chinese version of Twitter. An account purporting to be from “Apple Daily China” was opened in March, during student protests in Taiwan over the country’s relationship with China. The real Apple Daily was strongly supportive of the students, but Apple Daily China called their occupation of the Taiwanese Legislature “illegal.”

Given that similar protests may soon erupt in Hong Kong, it’s possible that Apple Daily China will also be used as a platform to speak against them.

The Occupy Central movement in Hong Kong, composed of civil groups that seek universal suffrage, is strongly supported by Apple Daily. An informal referendum they held recently was taken offline by a massive, professionally organized computer network attack. The websites of the real Apple Daily were also bombarded, many suspecting the sophisticated operation to have been launched from China.

Similarly, some Hong Kong Internet users have expressed their suspicions that Chinese communist authorities are behind the fake Apple Daily. “Hong Kong’s Apple Daily has always been blocked in the mainland, and now the mainland made up a fake Apple Daily to mislead the public. It’s unbelievably cheap!” wrote Kenshin Yasuyuki, adding a series of anger emoticons.

It’s unclear, however, whether the plug may suddenly be pulled on the knockoff website. A few hours after the first Apple Daily report on the fake website came out, it went offline for several hours. “This account has been suspended,” a message said.

Eric Chen, the president of Apple Daily Taiwan, remarked in the newspaper’s report: “The knockoff is not thorough enough. It would be much more convincing if they also copied our news and editorials in support of democracy.”