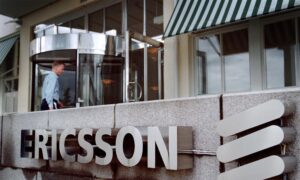 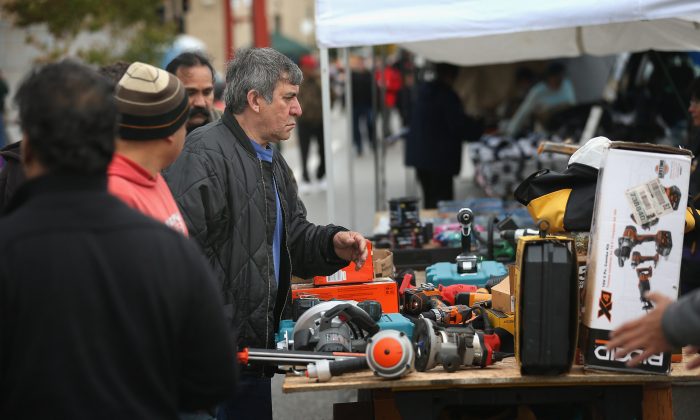 Shoppers look over tools being offered for sale by a vendor at the Maxwell Street Market in Chicago, Illinois in this file photo. The underground economy exists as separate economy that competes and complements the official economy in the provision of workers and resources. (Scott Olson/Getty Images)
Business & Economy

11 Million people work outside the system
By Heide B. Malhotra

America’s unemployment statistics are slightly misleading. They don’t include workers who have sought alternative sources of income in the underground economy. This economy has grown significantly given the sluggish recovery in the U.S. unemployment situation.

The underground economy is illegal. It is not just criminal in nature, such as smuggling, counterfeiting, prostitution, drug dealing, and gambling, but also includes legitimate lines of work. The illegality of legal work comes from not reporting earnings to the U.S. Internal Revenue Service (IRS). This massive type of parallel economy intertwines and coexists with the formal economy in ways that many people don’t know.

In the past, underground jobs included servants, caregivers, babysitters, au pairs, and construction workers. Nowadays, temporary workers in different industries, freelance workers, and contractors might not report their incomes to the IRS. Also, workers in the hotel, restaurant, and entertainment industries, as well as in small-sized firms, often get paid in cash, which is not recorded.

There are also people who report only a portion of their cash income to the IRS, which include small business owners, such as hairdressers and bar and restaurant owners, and workers like waitresses and cab drivers who depend on tips for a portion of their income.

To avoid paying taxes, “the underground economy relies largely on untraceable cash payments,” according to a Motley Fool article. Because cash payments don’t show up on bank accounts, the IRS cannot see where the money comes from.

Reasons to Avoid the Real Economy
Despite the illegality of the underground economy, “the official and unofficial economies do not exist independently from one another. In particular, the two economies compete and complement each other in the provision of workers and resources,” a Quantitative Assessment & Analysis article states.

The official economy benefits because part of the earnings from the underground economy are spent to buy products in the official economy, and taxes (via sales taxes) are even collected on many of those purchases. People who benefit from not paying taxes, however, have several motives.

According to tax advocates, there are groups and individuals who don’t want to pay taxes because they think it’s unconstitutional. Those against taxes claim that the Constitution’s 16th amendment regarding the federal income tax has not been ratified by the required number of American states. Allegedly, several states’ ratifications were not legal due to errors and violations of the ratification process.

Others are forced to work in the underground economy to make ends meet. People receiving welfare assistance, including food stamps through America’s welfare system, could lose benefits if they work in the official economy. Because the welfare system often provides less than the essentials needed for economic survival, poor people often are compelled to supplement their welfare benefits by working in the underground economy.

The nature of the whole phenomenon provides employment opportunities for people from all walks of life who can’t find a full-time job in the official economy.

And there are other benefits for the economy as a whole: According to a study by economists from Trakya University in Turkey, the underground economy provides benefits such as increased competition, employment, resources, and dynamism for the legitimate economy.

In the United States, a major contributor is the high unemployment level, a crisis that started with the outsourcing of unskilled and semiskilled labor in the 1980s. The recent financial meltdown and subsequent global recession of 2009 exacerbated the U.S. unemployment situation.

Rising taxes, labor market regulations, layoffs, reduction in work hours, and fewer opportunities to succeed in a formal environment are additional reasons that foster the rise of the shadow economy. Also, perceived corruption by the government and corporations drive people to look out for themselves and ignore the needs of society.

Numbers Hard to Come By
Given the obscure nature of the underground economy, it is difficult to estimate its size, as transactions are mostly conducted in cash, which cannot be traced.

“Measurement of the shadow economy is notoriously difficult as it requires estimation of economic activity that is deliberately hidden from official transactions,” according to a March discussion by Great Britain’s Institute of Economic Affairs.

However, different estimation methods have been developed that provide some understanding of the size of the underground economy.

According to an article published in 2000 in the Journal of Economic Literature, there are several methods for fathoming the underground economy. For example, direct methods employ surveys, while indirect methods mostly use statistical and mathematical theories developed by economists.

One indirect method bases its estimate on the difference between national expenditure and income statistics. If people spend more than they earn, that difference must come from somewhere, maybe the shadow economy. A more widely used approach is the currency demand approach. Under this method, the analyst assumes transactions are made in cash, increasing the demand for notes and coins overall, which can be tracked.

Every method has its drawbacks, making it difficult to estimate the true size of the underground economy, but there are some estimates.

Current Estimates
Despite the difficulty in developing valid statistics regarding the true number of workers in the underground economy, the IRS, economists, and others have put forward estimates.

According to a July White House report, there are 11 million people employed in the underground economy. However, the report does not indicate how this number was calculated.

A report from the Center for American Progress states there are at least 8 million undocumented workers, around two-thirds of whom work in the underground economy. These workers have a good reason for staying undercover: They face deportation if they report their income to the IRS.

A study by Richard Cebula and Edgar L. Feige examined the IRS tax gap for three different time periods ending in 2008, finding that between 18 percent and 19 percent of income was not reported to the IRS. Assuming this percentage has remained constant since 2008 and using the total U.S. personal income table developed by the University of New Mexico for 2012, the untaxed income at 19 percent amounts to $2.6 trillion—a hefty sum.

Downside to Not Paying Taxes
As usual, there is a catch to not reporting one’s earnings and thus not paying taxes.

Such individuals “forfeit contributions to Social Security, which will greatly reduce benefits in their retirement years, and get no healthcare, paid vacation or other benefits,” a Money Morning article states. These people also may run into problems when they try to obtain a credit card, borrow money to purchase a home, or face other circumstances requiring verification of income.

In addition, the IRS is not forgiving and relentless in looking for tax evaders. Once caught, the IRS can garnish tax evaders’ wages, place a lien on their homes and other personal property, withdraw the amount owed plus fines from bank accounts, and even send them to jail for up to five years.

Some people believe the underground economy is an obstacle to progress. It leaves taxation on the shoulders of fewer Americans. Others think it is a benefit to the overall economy because it puts people who are unable to find a job in the official economy back to work. Additionally, when those people spend their earnings, they are putting money back into the real economy.