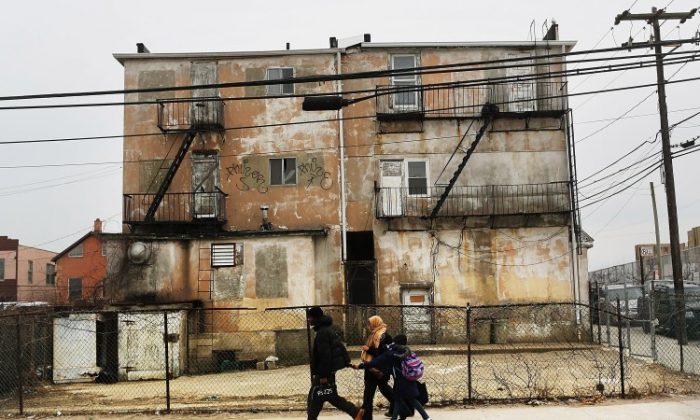 A family walks down a street in the Rockaways following Hurricane Sandy on Jan. 25, 2013 in New York City. (Spencer Platt/Getty Images)
US

New York City Council Speaker Christine Quinn said Monday that it is “startling and troubling to hear” that there have been reports of Hurricane Sandy-impacted homeowners seeing an increase in their property value.

“It raises real doubts about whether [the Department of Finance] is doing enough to ensure fair and accurate assessments, and how it is communicating this with the public,” Quinn’s office stated in an e-mail. Higher property values means more taxes for those affected homeowners.

Quinn said that she will hold a meeting on Feb. 26 to look into these concerns.

“As New Yorkers work to rebuild their homes and lives, we cannot allow them to be hit twice,” according to her office.

New York City Finance Chair Domenic M. Recchia said that the reports underscore potential problems in the city’s property tax system that should be assessed during the meeting.

On Monday, property owners in Manhattan Beach who were hit by Sandy said that the city is going ahead with the large tax hikes.

“We just sustained one of the worst national disasters in our nation’s history, and now the city is delusional, claiming our property values went up,” Ira Zalcman, head of the Manhattan Beach Community Group, told the New York Post.

Zalcman, who owns a home on Dover Street, said that he has spent around $100,000 repairing his basement, which was damaged during Sandy.

Another home on the ocean on Dover Street still has its windows and doors boarded up, but the market value for it has increased by more than $473,000 in the past year, according to the Post.

“During the sunniest of days people don’t understand the convoluted property tax formula in New York City, but telling folks victimized by Sandy that their bills are going up is as destructive to their psyche and financial bottom line as the super storm was to their homes,” said City Council Minority Leader James S. Oddo in a statement.

“We have to work together to do better than this,” he added.