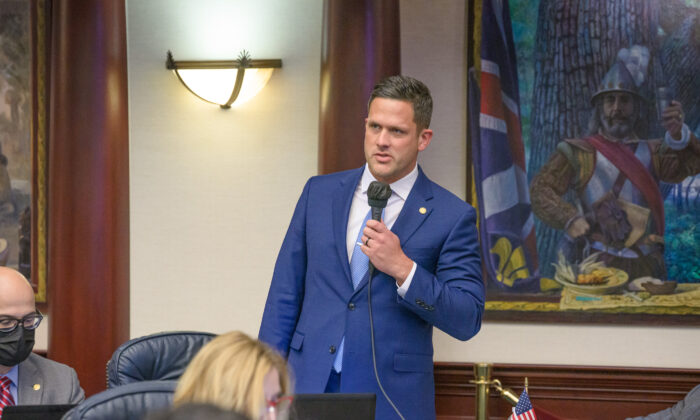 Rep. Joe Harding speaks on the floor of the Florida House of Representatives in this undated photo. (Courtesy of Joe Harding's office)
US News

GAINESVILLE, Fla.—Attorney Jeff Childers fumed as he read media banter and Twitter feed fury about what has come to be called the “Don’t Say Gay” bill.

It’s a misleading moniker, and deliberately so, aimed at sparking political outrage based on a lie, he and others told The Epoch Times.

Childers has been especially infuriated to hear that the bill’s sponsor, Rep. Joe Harding, of Ocala, has been repeatedly threatened and unrelentingly harassed as a result of a well-coordinated misinformation campaign by opponents of his bill.

So to fight back, Childers asked his 80,000 blog followers on March 16 to send small donations to Harding’s reelection efforts. A day later, more than 3,000 people had flooded the lawmaker’s campaign-spending account with $62,000.

Meanwhile, Harding’s political opponents in Florida and far beyond continued their campaign to stir up outrage over the bill.

The cause of all the drama is officially known as the Parental Rights in Education bill. The measure, recently passed by the Republican-led state legislature, will be delivered to the desk of Gov. Ron Desantis. A date has yet to be specified.

Under the Florida Constitution, DeSantis will have 15 days to sign the bill into law or veto it. If he does nothing, it will automatically become law. But DeSantis already has signaled his support. He’s also been outspoken about his frustration with those who perpetuate attaching the name “Don’t Say Gay” to the bill.

Despite what pundits and activists around the country have passionately decried, the bill wouldn’t ban the word “gay,” and wouldn’t keep kids from talking about their same-sex parents or LGBTQ loved ones.

It wouldn’t require schools to “out” gay kids to their parents.

And it wouldn’t ban teaching on important topics such as a 2016 shooting at the Pulse nightclub in Orlando that targeted the mostly gay patronage.

It basically says teachers can’t instruct children in kindergarten through Grade 3 on issues of gender identity and sexual orientation, and that schools must involve parents in any decisions involving the mental or physical well-being of the child.

If they don’t, the bill would give parents an avenue for making a complaint against the school and getting help from the state Department of Education, without having to hire a lawyer.

But after it was filed for consideration, Democrat politicians and activists quickly began referring to it as the “Don’t Say Gay” bill. And the name seems to have whipped many in the LGBTQ community and their allies around the country into a fury.

Floridians who spoke to The Epoch Times about their impressions of the hotly contested bill said they had been concerned when first hearing of the so-called “Don’t Say Gay” bill.

“I thought, ‘That doesn’t sound right,’” admitted Jason Gaines, a self-described conservative, who works in a coffee shop at a church in Gainesville. “That sounds homophobic.”

When he read beyond the headline that piqued his curiosity, he learned what the bill actually was written to do. He felt tricked. But he wasn’t surprised.

About a dozen people expressed similar sentiments when asked by The Epoch Times about the bill, which they recognized only by the name “Don’t Say Gay.”

When they were told what the bill language actually said, all revealed they were surprised to learn that, if made into law, the measure actually wouldn’t ban speech about homosexuality.

Indeed, they said, they were surprised to learn the word “gay” isn’t in the bill, at all.

But that hasn’t stopped political activists from far beyond Florida from mischaracterizing the legislation.

Chasten Buttigieg, husband of U.S. Secretary of Transportation Pete Buttigieg, spoke passionately for nine minutes on January 30 on MSNBC’s The Sunday Show with Jonathan Capehart about the bill.

Capehart mentioned during the interview that he, also, is gay and married to a man, and expressed outrage over the bill.

If it is signed into law, Buttigieg predicted the Florida bill would “kill gay kids,” by making many suicidal as a result of not feeling accepted in school. And should the family ever move to Florida, the adopted children he shares with his husband wouldn’t even be able to talk at school about having a wonderful weekend with their fathers.

The bill does not block kids from speaking about LGBTQ parents or loved ones.

Equality Florida has raised money and launched emotional TV advertising that portrays a student who is blocked from sharing during the class “Speech Day” about her heroes—her two moms.

An organization spokesman acknowledged a request for comment from The Epoch Times but did not respond.

Twitter users have blasted out venomous tirades about the bill for months, using the trending #dontsaygay.

Disney, which employs about 75,000 people in Florida, said on March 11 that it would pause contributions to all political candidates in the state. Outraged that their employer didn’t do more, Disney’s employees have begun staging walk-outs in protest.

And LGBTQ activists gathered March 7 at the steps of the Florida Capitol, then marched through the building screaming, “We say gay!”

Even DeSantis’ opponents in his bid to hold on to his job as governor of Florida have sent out streams of indignant tweets over the bill, connecting it to DeSantis’ leadership.

Considered to be his top challengers in the 2022 gubernatorial race are Congressman Charlie Crist (D) and Florida Commissioner of Agriculture and Consumer Services Nikki Fried, also a Democrat.

On March 16, Crist tweeted, “Ron DeSantis’s brutal attacks on LGBTQ students are disgraceful and have no place in our state. Period.”

But it’s all an effort to score political points by spreading a lie, Childers said.

“We are sending a message to the national Leftist groups,” he wrote in his blog. “Attack good legislators for doing the right thing, and then we’ll stand up for them.”

Elected in 2020, Harding says he has been physically threatened since introducing the bill. His wife and his four young children have been viciously mocked online. His office staff has endured a barrage of harassing phone calls, often with callers screaming “Gay!” repeatedly. They’ve sorted through a mountain of explicit emails. And when untrue rumors circulated that Harding’s home had been badly damaged by a tornado on March 5, a Twitter mob rejoiced, with many users saying Harding had gotten what he deserved.

Donors responding to Childers’ request said they were grateful to have a way to make their voices heard, too.

“I never donate to politicians, because most are lying grifters, however, I believe Mr. Harding did good work and deserves our support,” Cindy Bryant wrote in the comments of Childers’ blog.

Joy Potter Gotwalt commented, “I love that I can participate in a small way that makes such a big statement.”

Because he’s received so much hate, when the donations began pouring in, Harding thought his website had been hacked. He was encouraged to hear from so many supporters.

“This issue has captured the attention of concerned parents from all over the country,” he told The Epoch Times. “The Left may dominate on Twitter. But what we are seeing is parents are rising up to fight back against joy of control school districts. I am humbled to be the voice of parents all over America and the state of Florida.”

DeSantis has expressed frustration over the way the bill has been covered in the media. When a reporter began a question referencing the bill as “Don’t Say Gay,” DeSantis interrupted:

“We’re going to make sure parents are able to send their kids to kindergarten without having some of this stuff injected into their school curriculum.”

The bill’s language is clear. It does three things.

It bans instruction relating to gender identity and sexual orientation for children in kindergarten through Grade 3. Teaching deemed age-appropriate already is outlined in the state’s official standards starting in fourth grade.

The bill also says that critical decisions that will have an impact on the student’s mental or physical well-being must include the parent. Those decisions may involve class choices or how the school will handle a bullying or discipline problem, Harding said, but could also involve how to respond to a child’s request for help with gender-identity questions.

That language was necessary, Harding said because some schools in the state have policies encouraging school employees to have secret meetings with children to guide them through life-altering issues, such as gender transitioning, without notifying parents. He provided official school documents from two Florida counties to The Epoch Times that showed action plans school employees could take to help children make decisions about their sexual orientation and gender identity.

The parents of a Florida 12-year-old have filed a lawsuit against their child’s school for having secret meetings with the girl, encouraging her to transition to life as a boy, and for failing to report her suicide attempts, until the second time she tried to hang herself.

The third part of the bill gives parents and guardians a way to file a complaint with the state Department of Education against a school for withholding information, without having to hire an attorney. That was important because not all families can afford to pay for legal representation, Harding said.

Natasha Holt and Reuters contributed to this report.