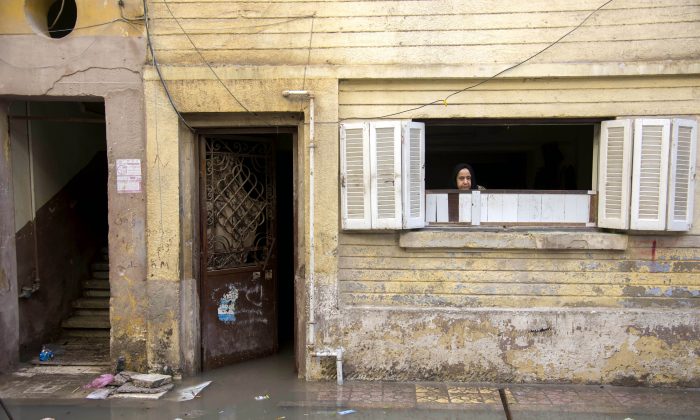 A woman looks from her house after a heavy rainfall in the coastal city of Alexandria, Egypt, Sunday, Oct. 25, 2015. (AP Photo/Heba Khamis)
Middle East

Outrage Builds as Dozens of Iraqis Electrocuted in Floods

BAGHDAD—Mohammed al-Qurayshi’s only son, Hassan, searched back and forth through CCTV footage to find the 12:30 p.m. mark on Oct. 31.

The video showed grainy images of two of his older sisters carrying bags of garbage through the garden and across the street. Fatima, 14, was dressed in deep blue and Rosul, 15, wore turquoise. It was then, just around the corner from their home, as they waded through a flooded street, that they were both electrocuted and killed — Fatima first, then Rosul, as she reached out to help her sister.

“These are their death certificates,” the elder al-Qurayshi said, holding out a pair of thin pink slips, noting the written cause of death was electrocution but that “the true cause of death is the Ministry of Electricity and the municipality.”

The Iraqi Ministry of Health said 69 people have died across the country over the past two weeks, due to a combination of the country’s dilapidated electrical grid and heavy rains that overwhelmed sewer systems.

Many died in their homes as they waded through flooded first-floor rooms. Others, like the al-Qurayshi sisters, were electrocuted in the city streets where electrical lines are haphazard and jerry-rigged, connecting homes to the municipal grid and a network of generators.

Most homes in Baghdad only receive nine to 14 hours of electricity a day from the government. While the rainy Iraqi winter has only just begun, this year’s death toll is already higher than last year’s, when fewer than 60 were killed by electrocution amid widespread floods.

“We don’t expect there to be more killed by electrocution,” said a Baghdad municipality official, speaking on condition of anonymity because he was not authorized to speak to the media. “We’re taking the needed measures to control the rain and improve infrastructure.”

Inadequate infrastructure was one of the rallying cries behind country-wide protests over the summer that succeeded in pressuring Prime Minister Haider al-Abadi to propose sweeping reforms. But in the months that followed, many of the government shake-ups have languished in parliament and while protests have dropped off, public anger has not.

Texas Storms: Death Toll up to 5 From Flooding

As news of Fatima and Rosul’s death circulated on social media, an outpouring of sympathy and anger followed. One comment from a fellow Baghdad resident read in ironic frustration: “When people are suffering in the summer heat, the government doesn’t give us electricity and then when it does give us electricity, it kills.”

Mohammed and his family say they knew about other cases of electrocution following heavy rains, had heard the warnings, but never took the threat seriously. The family had already been forced to move once from their home in the north Baghdad neighborhood of Ghazaliyah after their son was threatened with kidnapping in 2010. And in their new home in the Karrada neighborhood, they began receiving death threats from local militia groups about a year ago. That was when Mohammed had the security cameras installed around his house.

He never imagined they would be used to document his daughters’ deaths.

Mohammed, a medical doctor specializing in hematology, said the death of his daughters, seemingly senseless amid the country’s larger security crisis, has made him consider leaving Iraq for the first time.

“We aren’t just being killed by Daesh,” he said using the Arabic acronym for the militant Islamic State group, which has captured a third of the country’s territory. “It’s also the government killing its own people.”

In Fatima and Rosul’s bedroom, notebooks still sat stacked on a small desk in the corner and weekly class schedules were taped to the walls. Nagham, their older sister, tightly held a wad of tissue as she spoke.

“They loved school more than the rest of us,” she said. “Rosul wanted to be a doctor and Fatima wanted to be a teacher. Fatima used to say, ‘I’ll fill two whole classrooms with my students.'”

In the family’s living room, Mohammed sat on a sofa beneath two photos of his daughters, encased in heavy gold frames.

“That same day (they died), I drove through the Green Zone,” Mohammed said, referring to the heavily fortified Baghdad neighborhood that’s home to many foreign embassies and most of the country’s politicians. “I saw there wasn’t even a little bit of water anywhere. If it had been al-Abadi’s child, then do you think the government would do something?”