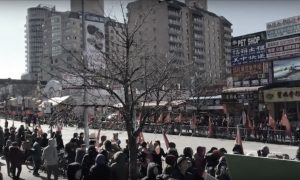 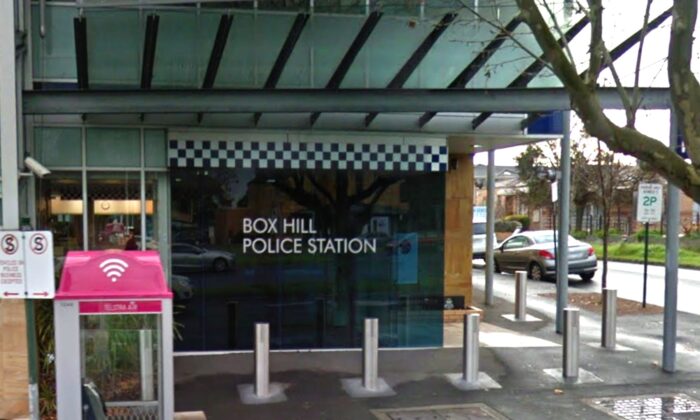 The raising of the Chinese communist regime’s flag alongside the Australian flag, at the Box Hill police station in Melbourne on Oct. 1, has been described as “problematic” and “insensitive,” according to City of Whitehorse councillor, Blair Barker.

Speaking with local radio station 3AW, Barker said that community members have legitimate concerns over the flag being raised at an Australian police station.

“My concern is that we’re seen to be promoting a regime that doesn’t support the democratic values and principles such as the rule of law, and people might associate our police service with the way the police services in that regime conduct themselves,” Barker said.

The flag raising event was organized by Box Hill police and a local business group, Barker confirmed in an email to The Epoch Times.

In attendance were state and federal ministers, local business representatives, as well as the local mayor, a Victoria Police spokesperson said.

Victorian Police chief commissioner Graham Ashton defended the event while speaking to ABC radio, saying that it was held in recognition of China’s “national day” and marked the beginning of the local council Whitehorse’s Chinese New Year Festival. Every Oct. 1, the anniversary of the Communist Party’s takeover of China, is observed as a national holiday in China.

A spokesperson for Victoria Police added: “Box Hill police work closely with their local community and the raising of the flag, for one day, represents the commitment Box Hill police has in acknowledging what is an important day for many in their local area.”

While the City of Whitehorse represents a diverse community, with Chinese-born citizens making up approximately 30 percent of the community, Barker said raising the Chinese flag was “insensitive.”

“I’m representing people who have Taiwanese heritage, Tibetan heritage, Uyghurs … these people have real concerns, and indeed where people sought asylum in Australia after the Tiananmen Square massacre [in 1989].” The Chinese regime claims Taiwan as part of its territory, despite it being a self-ruled island with its own democratically-elected government. Meanwhile, Tibetans and Uyghurs face severe persecution inside China for their religious beliefs.

Ironically, the police station is near a Uyghur restaurant only 400 meters down the road.

In December 2018, Barker sought to introduce a motion to have only the Australian national flag, the Aboriginal flag, the Torres Strait Islands flag, the flag of Victoria, and the City of Whitehorse flag raised at the Box Hill town hall after he received complaints from residents.

The motion was declared lost (pdf) after 8 councillors voted against the motion, with Barker being the only councillor voting for the motion.

“I share the view that flying a flag of a foreign nation is potentially divisive and in direct conflict with our strategic direction, which is to be an inclusive community,” Blair said at the council meeting.

“Our flag poles shouldn’t be a place where foreign rivalries and geopolitical tensions are played out,” he added.

Victoria Police acknowledged concerns “by some people within the community,” and added that “the station will continue to assess the appropriateness of raising any flag at the police station.”

However, many have continued to express anger and frustration.

How many Chinese police stations would fly the Australian flag on 26 January? Zero.

No Victorian police station should fly the flag of any foreign nation – full stop #springsthttps://t.co/ii6ayWAM2k

Another user tweeted: “Is Box Hill a Chinese colony now?”

One user tweeted out her formal complaint email to Box Hill police: “It is regrettable that Box Hill Police Station decided to raise the communist flag at a time when the news is full of images of police brutality been perpetrated by Hong Kong police onto their own people.” Hongkongers have staged mass protests to oppose Beijing’s growing encroachment over local affairs after it reverted from British to Chinese rule in 1997.

I just emailed a formal complaint to VIC Police pic.twitter.com/m4eBJR2hbN

In 2017, the Chinese flag was also raised at the Box Hill police station.

Here is the 1 October 2017 version. Apparently efforts to make the Box Hill Police station in Victoria a shrine for the CCP. These efforts led by Tom Zheng 白马商会会长郑玉堂, of Asian Business Association of Whitehorse Inchttps://t.co/8jTM4jEP05
orhttps://t.co/VM9mJD5HY1 pic.twitter.com/xyAv468XYy

“That’s how offensive it is to Chinese here who are not communists, and who oppose totalitarianism.”

Barker said while the flag raising could been seen as “a symbolic gesture to show that, yes, it’s a very multicultural place and we welcome all people…it’s people’s concern with that foreign regime that matters. It’s got nothing to do with Chinese people and our great multicultural area.”