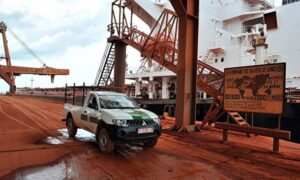 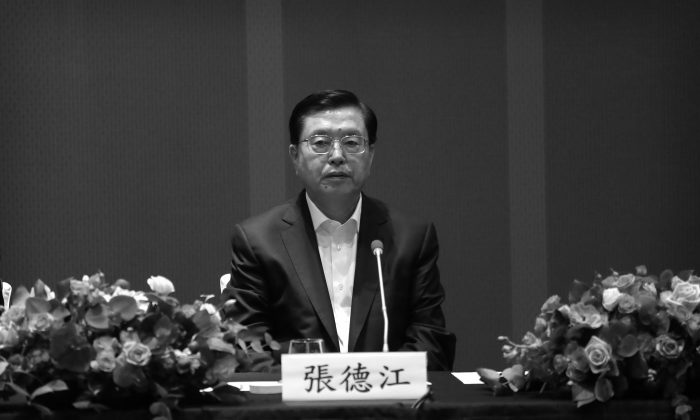 Zhang Dejiang, a member of the Politburo Standing Committee and Hong Kong overseer, in Hong Kong on May 18, 2016. (Isaac Lawrence/AFP/Getty Images)
China

Zhang Dejiang, the third-ranked Chinese Communist Party leader who holds the portfolio for Hong Kong-related affairs, stressed Beijing’s political authority over politics and law in the semiautonomous city. Among other issues he raised at the May 27 meeting, Zhang struck down proposals for separation of powers in Hong Kong and hinted at greater control by the mainland.

“Hong Kong’s political structure is neither separation of powers nor led by the legislature or judiciary. It is an executive-led one, with the chief executive as the core,” he said in comments translated by the South China Morning Post.

In his 50-minute speech given in Beijing’s Great Hall of the People, Zhang also warned that Hong Kong politicians were not to use their “high level of autonomy” to challenge central authority.

Zhang Dejiang, one of seven members of the Politburo Standing Committee that controls the CCP, is reaching retirement age this fall. He presents a top figure among an influential cohort of senior officials at odds with the current Chinese leader, Xi Jinping.

Ever since Hong Kong was returned to China from Great Britain in 1997, popular desire to preserve local freedoms has led to intense political contention and impasse vis-a-vis the communist authorities.

Recent events and analysis suggest that Zhang Dejiang has used his position of influence over Hong Kong to manipulate local unrest for political ends—namely, to distract the Xi leadership from carrying out its own moves against Zhang and allies.

In summer 2014, a white paper issued by the Chinese central government demanded “comprehensive jurisdiction” over Hong Kong, triggering the Umbrella Movement protests that included hundreds of thousands of people.

A decade earlier, in 2003, Hong Kong tried to implement Article 23 of its Basic Law with legislation of a National Security Bill. Hundreds of thousands of Hong Kongers protested the bill, intended to replace British colonial anti-subversion laws, since it could be manipulated by the Chinese regime to curtail the city’s civil rights and freedom of speech. The bill has since been stalled.

Choosing the city’s leader, the Chief Executive of Hong Kong has also been fraught with controversy. The holder of this office is elected by a body of some 1,200 Beijing-approved Hong Kong elites, not the general population. In March, Carrie Lam won the bid for Chief Executive, defeating her more popular rival John Tsang.

Previous reporting suggests that the decision to choose Lam in spite of popular opinion was Zhang Dejiang’s doing.

Li Tianxiao, a senior political commentator with NTD Television, says Zhang’s recent hardliner statements shows that he is determined to slow any changes to China’s Hong Kong policy prior to his anticipated retirement following the Communist Party’s 19th National Congress.

In particular, Li thinks Zhang’s speech was directed at Carrie Lam, telling her not to stray from Beijing’s political line.

At the same time, Li thinks Xi Jinping, whose anti-corruption campaign has encountered lasting passive resistance from CCP cadres, would prefer to avoid shaking the boat of Hong Kong policy.

“Xi Jinping can get rid of Zhang’s influence if he really wants to, but he wants to act in accordance with existing standards to move control of Hong Kong into his own hands,” Li said.