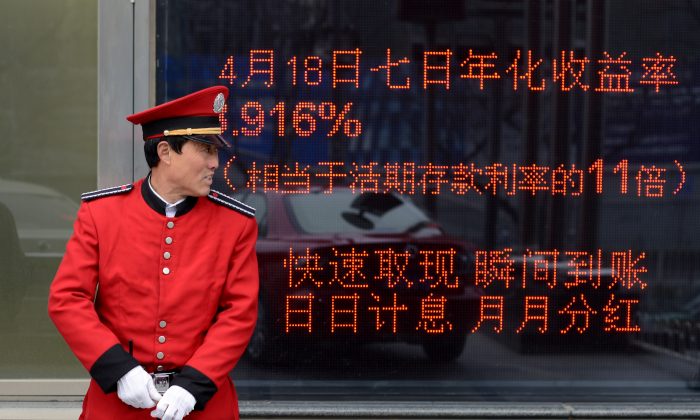 A guide standsin front of an electronic board at the entrance of a bank in Beijing on April 23, 2013. ( WANG ZHAO/AFP/Getty )
Business & Economy

Outflows Are Back: China Sells $87B of Treasurys in November

China seemed to have caught a break in October, but capital outflows came back in full force in November.

According to central bank data, foreign exchange reserves fell $87 billion to $3.44 trillion. The drop is almost as large as the record of $94 billion set in August.

“The increased likelihood of a December Fed rate hike will also have added to outflow pressures,” Capital Economics writes in a note to clients.

The Dec.7 fixing for the Chinese yuan suggests these pressures persist in December.

The People’s Bank of China (PBOC) set the midpoint r ate at 6.3985 per dollar prior to market open, 0.21 percent weaker than the previous fix 6.3851, the lowest since late August.

Chinese capital outflows are a hot topic because until the trend reversed in 2014, the country just kept accumulating foreign capital to the tune of $4 trillion. It has been downhill ever since and total capital outflows could hit $1 trillion by the end of the year.

A slow economy, a falling stock market, an increasing number of corporate defaults, and a post-bubble real estate market force domestic and international investors to get their money out.

When China sells foreign exchange reserves, it sells mostly U.S. Treasurys to keep the value of the yuan stable.

According to Capital Economics, movements in asset values and currencies reduced the dollar value of the foreign exchange reserves by around $30 billion. So the PBOC only actively sold $57 billion.

Capital Economics then adds back the trade surplus for November ($57 billion) and calculates total outflows of $112 billion.

READ: How to Calculate an Estimate of China’s Capital Outflows

According to Goldman Sachs, the currency valuation figure could be as high as $47 billion.

Goldman also thinks PBOC data is not comprehensive, as it neglects the activity of the state controlled banking system.

“Headline foreign exchange reserve data may not necessarily give a comprehensive picture on the underlying trend of [currency] conversion by corporates and households,” the analysts write. China’s sovereign wealth fund SAFE releases this data on Dec. 17.

However, the analysts think the recent addition of the yuan to the International Monetary Fund’s (IMF) reserve currency basket doesn’t have anything to do with the weakening of the yuan and foreign exchange outflows.

“The PBOC appears concerned that a depreciation would set back their efforts to encourage increased international use of the currency and could slow the process of economic rebalancing toward consumption,” writes Capital Economics.