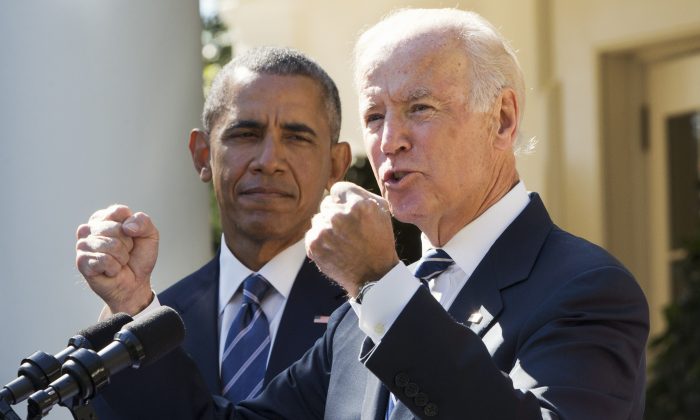 Vice President Joe Biden, with President Barack Obama, gestures as he speaks in the Rose Garden of the White House in Washington, D.C., Wednesday, Oct. 21, 2015, to announce that he will not run for the presidential nomination. (AP Photo/Jacquelyn Martin)
Politics

Out of Time: How Biden Decided Against Running in 2016

For weeks that had stretched into months, the White House and the Democratic Party were on edge, awaiting a decision about whether the vice president would jump into the presidential race. Biden’s own staff was torn between their belief in the vice president and their suspicion he would lose.

Even on Wednesday, as Biden’s team rushed to the Rose Garden, few knew exactly what he planned to say.

“Unfortunately, I believe we’re out of time,” Biden declared before television cameras, putting an end to one of the biggest dramas of the 2016 presidential campaign.

The scene that played out, with White House aides scrambling alongside frantic reporters, reflected the chaotic chain of events that led Biden, at long last, to announce he would not run for president. Along the way, Biden had gone right up to the brink of being a candidate, delaying his decision over and over again, before abruptly pulling the plug.

Throughout the ordeal, a tiny cadre of advisers and immediate relatives formed a protective ring around Biden, keeping his deliberations secret. This account of how Biden got to “no” is based on more than a dozen interviews with aides, friends and others in Biden’s orbit. Many requested anonymity to disclose private conversations

As late as Tuesday night, Biden looked like a man itching for a political fight. For the third time in two days, he used public remarks to take an unmistakable jab at Hillary Rodham Clinton for saying Republicans were her enemy, seemingly sending a warning shot that he would aggressively challenge her in the Democratic primary.

As Biden spoke Tuesday, a handful of political aides were’ pressing forward with plans to structure a late entry into the race. With no decision from Biden yet, they even weighed whether he could get into the race as late as Thanksgiving.

The next morning, Biden walked into the Oval Office and told President Barack Obama he wouldn’t be a candidate in the 2016 race.

The two men, who had developed a close friendship during their years in the White House, discussed Biden’s decision for about 30 minutes. Obama told Biden he wanted to stand alongside him in the Rose Garden as he announced the beginning of the end of his political career.

Any deliberations Biden had begun about the 2016 race ground to a halt in the spring when his oldest son died of brain cancer. The 46-year-old Beau Biden was a popular Democratic politician in his own right, and many in the party expected him to follow his father’s path to Washington, perhaps even to the White House.

In the weeks after his son’s death, Biden told well-wishers that his son had wanted him to make one last run for the presidency. By late summer, the vice president was ready to start weighing that prospect.

He surrounded himself with a trio of trusted aides: chief of staff Steve Ricchetti, political strategist Mike Donilon and former Sen. Ted Kaufman, who had run Biden’s Senate office for roughly two decades before replacing him in the Senate. Donilon and Kaufman, who were no longer working for Biden, were given offices in the White House office building close to the vice president’s suite.

Still, as he made phone calls and convened meetings with top Democrats at his residence in northwest Washington, Biden made clear he was in no way emotionally ready to run for president. He wanted to hear others’ take on the unfolding Democratic primary and how he could fit in the contest, but talked only in generalities, avoiding specific discussions about his own potential campaign.

Biden and Clinton, the Democratic front-runner, were friendly in the Senate and during her four years as Obama’s secretary of state. But he was underwhelmed by Clinton’s skills as a candidate and shared the confusion of others in the White House about her tone-deaf response to the email controversy continuing to dog her campaign.

Before Beau died, Biden had planned to announce his 2016 plans by the end of summer, but as Labor Day approached, he was nowhere near a decision. Eager to buy their boss more time, advisers good-naturedly noted that summer lasted into mid-September.

On Sept. 11, Biden walked onto the set of comedian Stephen Colbert’s new late-night talk show. He had been invited there to talk about Pope Francis’ upcoming visit to Washington, maybe poke some fun at himself.

But the discussion instantly turned serious, with Colbert pressing Biden repeatedly about his son and how his Catholic faith has helped him through so much tragedy. With surprising candor, Biden described himself as a man consumed with grief and unconvinced he could commit to a presidential campaign.

“Nobody has a right, in my view, to seek that office unless they’re willing to give it 110 percent of who they are,” he said. “I find myself—you understand it—sometimes it just overwhelms you.”

The response to Biden’s soul-baring—a rare unscripted and genuinely authentic moment from a politician—was overwhelmingly positive. Compared to Clinton’s caution, the contrast was striking.

From then on, Biden remained coy about his leanings, but a campaign-in-waiting began to spring up around him.

A super PAC, Draft Biden, began raising money and positioning staffers in early primary states like Iowa, New Hampshire and South Carolina. At the White House, a small handful of aides pored over filing deadlines, delegate counts and other campaign logistics, while reaching out discreetly to veteran political operatives who could staff a potential campaign.

As summer turned to fall, speculation about Biden’s plans grew to epic proportions, setting off a will-he-or-won’t-he parlor game that thrust Biden deeper into the spotlight than he’d ever been before. On the day of the first Democratic debate, Oct. 13, social media was abuzz with rumors Biden would fly last-minute to Las Vegas to make a dramatic entrance into the race.

Biden watched the debate from Washington. He told friends and advisers privately that he was underwhelmed by Clinton’s performance.

But the consensus among most other Democrats was that Clinton’s performance had been commanding, softening concerns about her strength as the party’s likely nominee. Democratic leaders—including Rep. James Clyburn, the No. 3 House Democrat from the critical primary state of South Carolina—began questioning whether Biden had missed his window.

In a last-ditch effort to quell skepticism about his chances, Biden authorized Kaufman to circulate a letter laidenst week to former staffers promising a quick decision and previewing what a campaign would look like: an unscripted “campaign from the heart” focused on the middle class.

Another weekend came and went without a decision from Biden, and his advisers started pressing for a decision with renewed vigor. Many had put their lives on hold indefinitely while they awaited his next move.

On Tuesday night, Biden shared a stage with former President Jimmy Carter for an event honoring former Vice President Walter Mondale. He kicked up further speculation he was about to get in the race with another thinly veiled attack against Clinton.

But that same evening, Biden finally made the call.

“I could just cry, seriously, because I also know how qualified and capable he is to serve,” said Terri Goodmann of Dubuque, Iowa, who has known Biden for 30 years. “There just wasn’t enough time.”