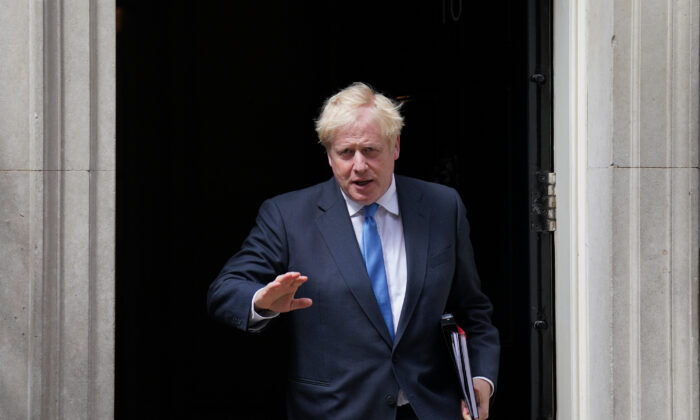 OTTAWA—The Canadian government says it is business as usual with the UK despite the dramatic ousting of UK Prime Minister Boris Johnson by his party.

Global Affairs Canada and the Department for International Trade signalled Thursday that the relationship with the UK will remain strong and that the toppling of Britain’s prime minister will not affect Canada’s negotiations on a crucial free−trade agreement.

Ralph Goodale, Canada’s High Commissioner to the UK , said the “political developments in the UK presently are certainly momentous” but Canada has “fundamental confidence” in the strength and functioning of Britain’s democracy.

“Canada and the UK have a large, multi−dimensional, mature and durable relationship,” he said. “Our common priorities are not dependent on personal considerations. Key files like free−trade negotiations, support for Ukraine, building deeper security and intelligence partnerships and battling climate change will continue to progress as planned and expected.”

His remarks come at a time of high drama at Westminster which led to Boris Johnson’s ousting as prime minister after only 3 years in office.

In a statement outside Downing Street Thursday, looking typically dishevelled, Johnson said he would step down as prime minister when a replacement is found.

The announcement followed a tumultuous 24 hours in which he tried to cling onto power despite facing demands to go from a string of Conservative MPs who said he was no longer fit to serve.

In a bid to force him from office, dozens of ministers resigned Wednesday. But the beleaguered Johnson entrenched himself in Downing Street, hurriedly reshuffling his ministers to fill gaps, until he acknowledged his position had became untenable.

In his resignation speech Thursday, Johnson said it was “painful” not to see through the political project he had begun, but he said at Westminster “the herd instinct is powerful and when the herd moves it moves.”

As potential successors to Johnson hurriedly tried to muster support at Westminster, in Ottawa ministers stressed that the political chaos in London would not affect British−Canadian relations.

A spokeswoman for International Trade Minister Mary Ng said negotiations for the new trade deal will continue smoothly as Canada and the UK share a long history and close ties.

“Canada and the United Kingdom share a long history and close people−to−people ties,” said Alice Hansen. “We are confident tat our trade negotiations will continue to go smoothly.”

Johnson, who saw through Britain’s exit from the European Union, championed closer links with Canada, including on trade, following Brexit.

When Britain cut its ties with the European Union, it also ended its inclusion in the Canada−European Union Comprehensive Economic and Trade Agreement. The two countries signed a continuity agreement keeping most elements in place while a new bilateral trade deal is struck.

Official negotiations for a Canada−UK free trade deal began in March. Britain is Canada’s third−largest export destination, behind the United States and China.

Sabrina Williams, a spokeswoman for Foreign Affairs Minister Mélanie Joly, said the UK, is one of Canada’s closest and most important allies. She said both nations have “a strong mutually beneficial relationship, and a long tradition of close, strategic partnership.”

However, there is likely to be a degree of uncertainty in Ottawa about whether Britain’s robust stance in support of Ukraine — including supplying military equipment — will continue at the same pace amid the political turmoil in London.

Johnson has been a vocal opponent of the invasion of Ukraine, working in tandem with Canada and other western countries to impose sanctions and counter disinformation campaigns from Russia.

While he has been Prime Minister, the UK has also supported reinforced security and surveillance in the Arctic to protect sovereignty on Canada’s Northern flank.

Johnson narrowly survived a confidence vote last month, refusing to move out of Downing St in spite of losing the backing of 41 per cent of Tory MPs.

The attempt to get rid of him followed a series of scandals including the revelation that parties were held at Downing Street at the height of the pandemic, in breach of COVID−19 rules.