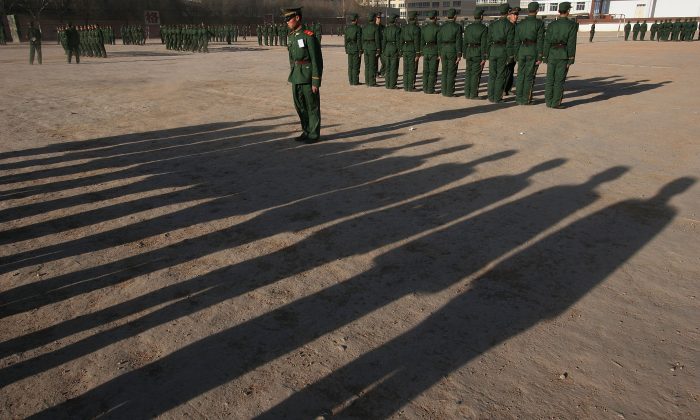 Chinese officials who get ousted by the Party usually get a quiet send-off: a closed-door show trial, then an official statement about their sentencing is the common protocol.

Jiang and those loyal to him are in a political tug-of-war with the current leader, Xi Jinping, and his supporters. All three generals were taken down on bribery and embezzlement charges between 2015 and 2016, as part of Xi’s anti-corruption campaign, which has targeted members of Jiang’s faction.

Gu received a commuted death sentence with a two-year reprieve, which likely means he will serve life in prison. Guo was sentenced to life, and Xu died of bladder cancer while awaiting trial.

In a segment that aired on Oct. 2, part of an eight-part television program about China’s military, the three were shown being led to court in handcuffs, or sitting in court as they were being sentenced.

Guo in particular was shown giving a statement admitting his guilt. “I must sincerely recognize and accept my guilt,” he said.

By airing the program just two weeks before the pivotal 19th National Congress, at which the regime’s new top leadership will be unveiled, CCTV helped convey the message that Xi is in control, as these three generals were once among the most powerful men in the Chinese regime.

The rare public showing of their downfall also serves as a harsh warning to those currently in the military and signals to the Jiang faction what fate they could face under Xi’s crackdown.

More than 60 other high-ranking generals have already been purged by Xi as he continues his campaign to root out corruption.