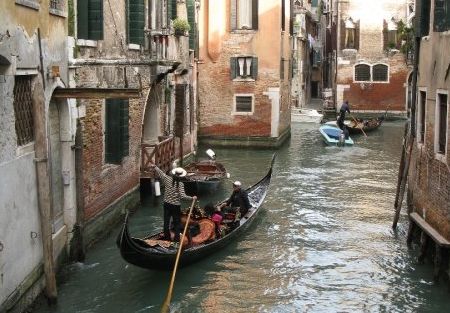 A file photo of Venice, Italy. An artificial island in Italy, an old garbage dump, may become a Venice-inspired theme park, according to an article published Oct. 31, 2013, in The Local. (Tara MacIsaac/Epoch Times)
International

A top maker of amusement park rides has unveiled a controversial project to transform a “rubbish island” in Venice into a cultural attraction, insisting the floating city would not be blemished by a fun park.

The €80 million leisure centre “will not be an amusement park” with rides only, Alberto Zamperla of Zamperla said as he explained the plan to transform the artificial island of San Biagio, an old dump site, into a theme park with a cultural slant.

Zamperla, the company behind two-thirds of the rides at Eurodisney in Paris, hopes to clean up four decades of rubbish on the four-hectare site at the entrance to the Giudecca Canal and transform it into a centre of fun, history and learning – if it can get the necessary authorization.

“We’re talking about the history of Venice – one of my passions – but done my way,” Zamperla said. …

Academics from Cardiff University discover a number of genes linked to the disease which could help them understand what causes it.

Researchers from Wales have helped uncover 11 new genes linked with Alzheimer’s in a major breakthrough into the causes of the disease.

Scientists from Cardiff University jointly led an international collaboration gathering data from more than 74,000 people – the largest ever study of its kind – as part of a two-year project, the findings of which are published today. …

The ruins of a huge building, which is surmised to be a temple constructed during the reign of Cyrus the Great, has been unearthed during an archaeological excavation near Persepolis in the southern Iranian province of Fars.

“During the excavation, which was carried out by a team of Iranian and Italian archaeologists in the ancient city of Parsa on the perimeter of Persepolis, an amazing structure that dates back to the early days of the Achaemenid era was discovered,” Alireza Asgari Chaverdi, the Iranian director of the team, told the Persian service of CHN on Tuesday. …

The Inter-American Development Bank will invest $1.27 million in the project.

Ripe coffee cherries may be red, but their farming and processing is about to become green with a new project announced by the Agriculture and Livestock Ministry (MAG) on Tuesday.

With $1.27 million in funding from the Inter-American Development Bank, the pilot program will tackle Costa Rican coffee’s excess carbon production, moving towards the country’s goal of becoming the first carbon-neutral country by 2021.

Along with being a large producer of greenhouse gasses, the coffee sector is also extremely susceptible to production losses from climate change. Temperature increases have a devastating affect on the quality of coffee. …

The Burmese opposition leader, a former political prisoner in her country, is currently on a visit to Europe and on Sunday was made an honorary citizen of Rome.

After the private meeting between Aung San Suu Kyi and Pope Francis, Vatican press office director, Father Federico Lombardi briefed journalists and described what he called “a great feeling of harmony and accord” between the Pope and this “symbolic figure of the Asian world”. …

Canada: Toronto food event aims to shatter our distaste for crunching on crickets

Bugs could be the next great food source in the world if more people would get over an aversion to insects.

If you were to eat a cricket canapé what beer would you drink with it?

Japan: For one idol group, sushi restaurant is the stage

An all-female group is causing a sensation here with the way its members wind down after their song and dance routines: They make sushi.

Ten “girls,” ranging in age from 16 to 25, make up Aidoru Kyoshitsu (Idol classroom).

On weekdays, they work part-time at a sushi restaurant in Nagoya’s Naka Ward run by their manager. On Sundays, the group gives performances in the restaurant Sushi Dokoro Goichi, which occupies four floors of a building. …