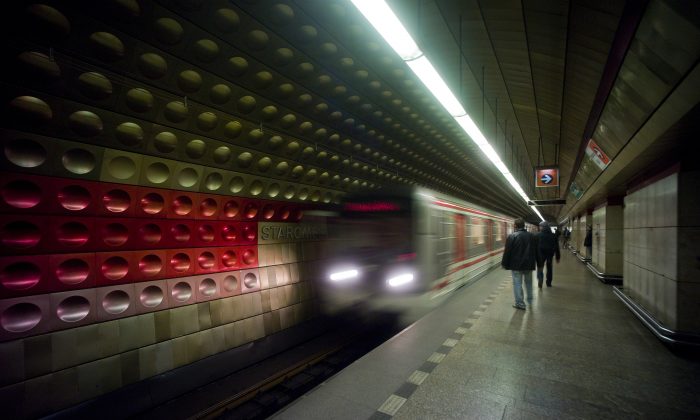 A train leaves the Staromestska station on the B line subway in Prague, Czech Republic on Nov. 9, 2012. (Michal Cizek/AFP/Getty Images)
International

“Are you alone? Would you like to meet someone? Then always ride in the middle car. Look around, and if you’re being nice look at him. Do not be afraid to smile.”

That is one message Prague City Hall and its Transport Authority are proposing for new singles-only metro cars, which are expected to roll out the second week of November. The first cars, which have been planned for more than a year, will be labeled as such by stickers on the doors reading “dating wagon” so that passengers know what cars they are getting into.

Apart from direct conversation, passengers will also be able to leave personal messages for potential lovers on a city website. …

After recent health-driven moves to tax or restrict the use of energy drinks, artificial sweeteners and electronic cigarettes, French health authorities have now set their sights on cracking down on scented candles and incense, because their aroma could be masking toxic fumes.

It’s one of the last refuges from the high-stress, modern world. A quiet room, and some scented candles or incense sticks is the relaxation method of choice for millions throughout the world, including France.

But the French government announced plans this week to introduce a ban on certain products, citing concerns that the aromas are hiding the release of carcinogenic chemicals.

The government has also noted that many of the products claim to “purify the air” but in reality are more likely to do the exact opposite. …

As much as Swedes love tea time and tarts, making friends with them is no piece of coffee cake. In his hopes of befriending bashful Swedes, one man decided to take things into his own hands – literally – by starting a “furniture fellowship”.

The idea? You buy something at Ikea and find the product’s deceptively simple instructions baffling. You ring up cheerful Caio Andrade, he helps you figure out the infuriating furniture, and then you both go out for a beer.

Andrade, like many foreign students living in Stockholm, loves the city and his classes but has had trouble making Swedish friends outside the classroom.

“I saved money for two or three years back in Brazil in order to come here,” Andrade, a student at Hyper Island, told The Local. “But I still don’t know much about Swedish culture. Swedes are friendly at school but they don’t call you up after.” …

The derelict dairy farm in Mid Wales dates from 1725 and still has photographs of the last owner in a striking red dress hanging on the walls.

It still has photos of the last owner hanging on the wall and even the dress that gives the derelict manor house its name can still be found inside.

These engrossing images show touching, if eerie, signs of life inside a former dairy farm which has been left to crumble away for decades.

The farm house is filled with forgotten personal effects including letters, photographs, lights and lamps.

Dubbed The Red Dress Manor, it has been explored by several photographers and brought a tear to many people’s eyes.

These haunting images – including the dress which is still on a hanger in a wardrobe – were captured by photographer Dan Circa, after he took a trip around the derelict building. …

Kenya: Pregnent Women in Kenya Have an Unusual Craving—Rocks

Pregnant women often have unusual cravings and in Kenya it’s not unusual to crave, and eat, soft stones known as “odowa”. Watch video. …

One of the pioneers behind the rise of the world’s biggest watchmaking group Swatch criticized the luxury-focused industry in Switzerland on Thursday, charging it had missed the “smartwatch” train.

Former executive Ernst Thomke, who ran what would become the Swatch Group from 1984 to 1991, said the Swiss watchmaking industry was so obsessed with dominating the market for super-expensive and often jewel-studded watches that it was letting other countries take the lead in the emerging market for high-tech timepieces with smartphone capabilities.

The development of such watches is happening “far from our borders, in the United States, in Japan and in South Korea,” the 74-year-old told the Le Temps daily.

“These online watches will be made by Samsung, Apple and others. Switzerland has completely missed this bend in the road,” he added.. …

The Jakarta Public Order Agency (Satpol PP) will not raid street singers despite the intensive raids currently being conducted to stop those working on the streets, a senior official has said.

Satpol PP head Kukuh Hadi Santoso said on Thursday that street singers did not have community and social problems (PMKS), therefore, they did not need to be taken care of by the city administration. …