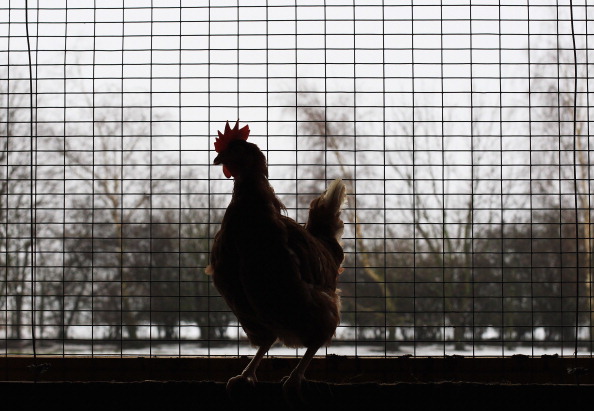 A chicken sits in coop in an organic accredited poultry farm on Jan. 7, 2011 in Elstorf, Germany. The town of Kitzingen, in the south German state of Bavaria, has barn houses holding healthy and vigorous chickens. (Joern Pollex/Getty Images)
International

In the town of Kitzingen, in the south German state of Bavaria, a nondescript barn houses some heavily researched chickens.

They look healthy and vigorous. Some are sitting on poles, others are scratching on the ground, and a few have retreated to nests at the end of the chicken coop. …

The hole in the ozone layer over Antarctica stretched for the third time this year to reach cities in the south of Argentina and Chile according to the Izaña Atmospheric research centre in Tenerife, Canary Islands.

The increase of the hole in the ozone layer is particularly harmful in the months of October and November, when ultraviolet radiation increases in the Southern hemisphere.

“The ozone layer has diminished more than 50% from its normal values and the UV intensity index has jumped from four to ten, according to the 16 October reading when the hole reached the 51 degrees south of Rio Gallegos in Argentine Patagonia”, said Alberto Redondas, a researcher at Izaña. …

You want a ballot with that?

All McDonald’s restaurants will be decorated with election material and a few will even host mobile polling stations where customers can cast their ballot after picking up a greasy meal.

The initiative was dreamed up by the national government, local government associations and the youth association DUF to prevent a repeat of the 2009 elections, in which the 65.8 percent turnout was the lowest in 35 years. …

Researchers in Finland could be close to a breakthrough in the search for a vaccine against Type 1 diabetes. Clinical trials could start soon.

A team working at Tampere University has discovered the virus that causes type 1 diabetes. The enterovirus penetrates the pancreas and destroys insulin-producing cells, eventually causing diabetes.

Researchers have looked at more than a hundred different strains of the virus and pinpointed five that could cause diabetes. They believe they could produce a vaccine against those strains.

”We have identified one virus type that carries the biggest risk,” said professor Heikki Hyöty. ”A vaccine could also protect against its close relatives, to give the best possible effect.” …

A two-year-old giraffe was killed in a traffic accident on Saturday morning while being transported across Spain.

The giraffe, named Jerezana, was on its way from the southern city of Jerez to Bioparc de Valencia when a truck crashed into the convoy carrying the animal at 12:30am.

The collision gravely injured Jerezana, according to a veterinarian traveling with the convoy. Jerezana received immediate medical attention. …

Wałęsa, who led the Solidarity union in its heyday in the 1980s and went on to become Polish president from 1990 to 1995, said, “Here in Warsaw, together with other Nobel laureates, we want to find answers to the pressing issues of our times.”

Solidarity was the first independent trade union in the Soviet bloc and played a key role in bringing down communism in Poland without bloodshed in 1989.

Wałęsa said that solidarity between people was vital in confronting the problems of the contemporary world. “We have work together in order to find solutions—how to build a secure and affluent world,” he added. …

Iceland offers its citizens more internet freedom than any other country in the world, according to a recent study by an independent watchdog. The North Atlantic nation scored six out of a possible 40 points on the index—the 2013 Freedom House Index —which takes into account limits on content, obstacles to access and violations of use. The lower the number of points obtained, the greater the freedom.

The Baltic nation of Estonia came in second place, with Germany, the US and Austria ranked 3rd, 4th and 5threspectively. …