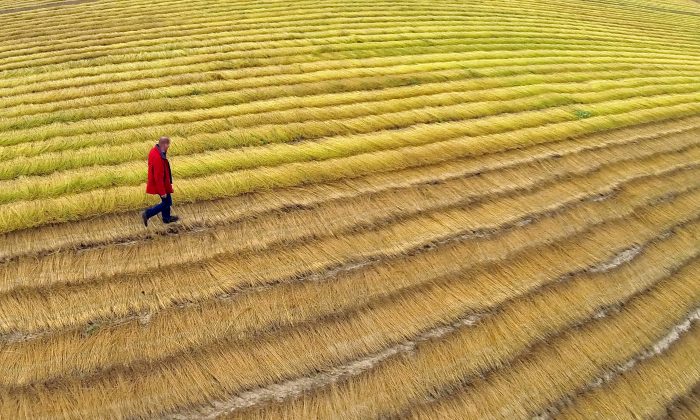 A farmer checks linen during in Hondschoote, France, on July 30, 2013. According to an Oct. 13, 2013 article by France 24, French male farmers are 20 percent more likely than the rest of the population to commit suicide. (Philippe Huguen/AFP/Getty Images)
International

New Zealand: Inside the gates at Big Tobacco’s happy place

The Government wants the tobacco industry gone by 2025 but defiant cigarette manufacturers claim they will still be going strong. Their slogan: “We can.”

Chris Syrigos is peering through a glass panel on the front of one of his megabucks, state-of-theart cigarette-making machines.
Syrigos, manager of New Zealand’s only fag factory, is watching some of the 19 million smokes a day his company produces whizz past at an astonishing speed. …

Male farmers in France are 20 percent more likely to take their own lives than the rest of the population, a new report says, with financial pressures as well as social isolation among the possible causes of the high suicide rate.

French farmers are far more likely to commit suicide than the general population, with those facing severe financial difficulties most at risk, a new study has revealed.

A total of 485 farmers killed themselves between 2007 and 2009, making suicide the third biggest cause of death among agricultural workers after cancer and cardiovascular disease, according to a report published by the French Institute for Public Health Surveillance (InVS) on Thursday. …

Local authorities in Germany fear their social funds are being used up by Romanians and Bulgarians who are taking advantage of the system. But a new study by the European Commission dismisses that belief.

German Interior Minister Hans-Peter Friedrich warned earlier this week of a wave of poverty-stricken immigrants heading from Romania and Bulgaria to Germany – in particular, migrants who are after the country’s social welfare funds.

“It just can’t be the case that freedom of movement [in the EU] is being so abused by people who are only changing countries to benefit from higher social assistance,” said Friedrich at a meeting of EU interior ministers in Luxembourg on Tuesday (08.10.2013). Two days later, a court in North Rhine-Westphalia (NRW) poured oil on the fire when it granted social assistance to a Romanian immigrant family that had unsuccessfully sought work in Germany for the past year.

Romania and Bulgaria have been members of the European Union since 2007, and since then citizens of these countries have been able to travel to Germany without a visa, or any other restrictions. For the last seven years there have been limitations for Romanian and Bulgarian jobseekers in Germany, but those restrictions will expire at the end of 2013. …

Can experts really guarantee that a proposed radioactive waste dump near Kincardine will be safe for 100,000 years?

At low-key environmental hearings in southwestern Ontario, the arguments are technical to the point of distraction. But the fundamental question being addressed by a federal panel is alarmingly simple.

Should radioactive nuclear waste be buried next to Lake Huron, a remarkably pristine body of water that is one of the wonders of the world? …

Czech Republic: ‘War of the Currents’ amps up

Lined up against him were the likes of the engineer George Westinghouse, who was among those pushing for, and putting their money on, an alternating current (AC) grid.

The AC advocates ultimately won the day over light-bulb pioneer Edison, and today it is the form in which electricity is distributed across the world.

However, electronic items and many other types of system typically use direct current, meaning that AC must be converted into DC to power them.

Some observers believe that recent developments in transmission systems and in alternative energy mean that DC, said to offer considerable efficiency savings over AC, should increasingly be favored.

In the Czech Republic, a center is being developed, Nupharo Park, to help direct current technology reach the market.

The hub in Northern Bohemia is working closely with the University of Pittsburgh, which has a campus of its Katz School of Business in Prague. …

Thailand: Spirit of Oct 14 should prevail

Commemoration of the 40th anniversary of the Oct 14, 1973 uprising turned toward reconciliation as core leaders from the October Generation offered compromising words for the red shirt movement, but urged it to embrace other grass-roots democratic forces.

Seksan Prasertkul, a former student leader of the October Generation, said at Thammasat University auditorium that the spirit of the Oct 14, 1973 uprising was to fight against dictatorships and establish democracy. All parties should hold it firmly as it was only with “valuable democracy” can a peaceful society be sustained.

Mr Seksan, a retired Thammasat University political scientist, said in light of the increasing rights and liberty of the people following the October uprisings, new political classes have emerged and collaborated — one was the middle class-based movement that was concerned about natural resources and the environment, and the other, the provincial middle class, was engaged in the representative parliamentary system. …

Davao City on the southern coastline of Mindanao has emerged as the least vulnerable to the impact of climate change among eight cities in the Philippines, and it could continue its strong economic growth by institutionalizing sustainable environmental measures, according to a 2012 study released by the World Wide Fund for Nature (WWF).

Weather data from Philippine Atmospheric, Geophysical and Astronomical Services Administration over a 20-year period, from 1990 to 2010, show that while the city experiences year-round rainfall and lies in a typhoon-free zone, there has been a “moderately increasing trend in annual rainfall,” said Jose Ma. Lorenzo Tan, chief executive and vice chairman of WWF.

The information was used to predict how climate change could affect trade and industry in these areas for a 50-year period and how local authorities and private stakeholders can counter its adverse consequences. …