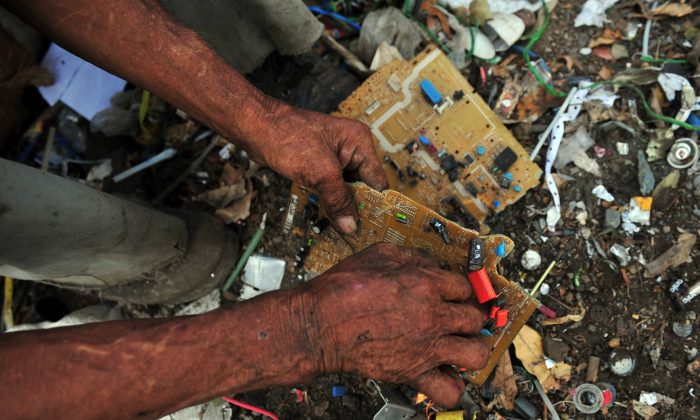 A man collects copper from an electronic circuit to sell for recycling, in a landfill of Managua, Nicaragua, on Jan. 11, 2013. E-waste is among the top environmental issues facing our world in 2014; new products are entering the market aimed at giving us our high-tech devices with less waste. (Hector Retamal/AFP/Getty Images)
2013 Year in Review

Electronic and nuclear waste, fresh water degradation, and organic agriculture are among the major environmental issues Epoch Times will explore as we leave 2013 behind and face our future as Earth’s caretakers.

For the past 20 years, 10 percent of all U.S. electricity has run on fuel from Russian warheads. The last batch of Russian nuclear warheads arrived in the United States in December, wrapping up a deal made at the end of the Cold War.

The U.S. Department of Energy states that the nation contains millions of gallons of radioactive waste and “huge quantities of contaminated soil and water,” which should be cleaned up by 2025, mostly by geomelting. Geomelting combines radioactive waste with clean soil and heats it into a very hard, glass product. It is an expensive measure, however, and not a solution for contaminated water.

Annually, phones with a combined worth of over $60 million are discarded in the United States. The United Nations released a study on electronic waste in December, predicting a global increase to 65.4 million tons of e-waste to be produced annually by 2017, “equivalent in weight to 200 Empire State Buildings.”

Devices that cut down on waste are gaining traction. For example, Phonebloks has developed a modular phone that allows a user to replace individual components as needed or desired instead of buying a whole new phone. Phonebloks got a show of support by a million people worldwide through the “crowdspeaking” website Thunderclap, a platform “that helps people be heard by saying something together,” according to the website description.

Phoneblok’s release is expected in 2014, though a date has not been announced.

The London Array contains 175 Siemens turbines and is located in the Thames Estuary off the eastern shore of London, England. (London Array Limited)

In the first three quarters of 2013, renewable energy sources made up nearly 13 percent of the net energy production in the United States, according to the U.S. Energy Information Administration (EIA).

The United States will see a slight increase in renewables in 2014, with Texas leading, mainly because of its humongous wind energy parks.

The world’s largest offshore wind park, the London Array, became fully operational in July. Located in the Thames Estuary east of London, it is expected to power 500,000 UK homes annually.

The UK warns of potential blackouts in 2014, however, as European Union regulations against coal push forward, perhaps too fast for other energy sources to replace it.

One of the key proponents of renewable energy in America, professor of civil and environmental engineering at Stanford University Mark Z. Jacobson, has defended major German renewable energy company Energiewende, which was under fire in 2013.

For example, a New York Times article highlighted the inconsistent nature of renewable energy, with gluts in high winds and lulls in low winds. Part of Jacobson’s response is quoted by the online publication Renewable Energy World: “Several groups have shown that it is possible to combine wind and solar and use geothermal as a base load and fill in gaps between demand and renewable supply with hydroelectric and/or stored concentrated solar power to provide a grid reliable to 99.8 percent and higher.”

Water purification devices, such as the Swiss Life Straw, are gaining momentum. The Nazava water filter, which won a 2013 Silicon Valley Tech Award, is another such device. It uses affordable technology to bring clean water to developing countries.

These innovations are sparked by the continuous degradation of freshwater resources. Pesticides and other agricultural or industrial waste products are still the worst offenders in polluting the world’s water supplies, but another threat gained greater attention in 2013 will carry into 2014: plastic microbeads in cosmetic and personal hygiene products.

An important water restoration project on the horizon for the San Joaquin River in 2014. After an 18-year legal battle and six years of planning, the program will start up, aiming to restore water flow to the second largest river in the United States. Salmon will be reintroduced to the habitat.

It’s hard to pinpoint how many species have become extinct over the past year.

For example, in May, zoologists in Taiwan declared the Formosan clouded leopard (Neofelis nebulosa) extinct in the wild. However, the leopard had not been seen for more than a decade and was likely extinct long before the declaration. Researchers held out hope. They spent the past 13 years searching for the clouded leopard and finally gave up this year.

Janet Scott, a programme officer at the International Union for Conservation of Nature, explained in an email that even for high-profile and well-studied species it can be difficult to determine the populations, but “for insects and plants there is often far less time, money, and resources for surveys.”

Most conservation efforts are directed at apes, elephants, big cats, the Black rhinoceros, and the Giant panda, Robert Smith at the University of Kent told National Geographic in an article published Dec. 15.

Currently, 16 animals are listed as “critically endangered” by the World Wildlife Fund, including the Amur leopard, the Black rhino, and the Cross River gorilla. Another 33 animals are “endangered,” and 16 are “vulnerable.”

According to National Geographic, 20,000 species are near extinction.

In the past four years, some 400 new species have been discovered. Researchers at Dalhousie University in Halifax, Canada, estimate the number of known species to be less than 13 percent of all species on the planet.

Here’s a look at a few species discovered in 2013.

An olinguito, a new species discovered in August 2013. (Mark Gurney for Smithsonian via Getty Images)

About the size of a raccoon, the olinguito was discovered, hidden in plain sight, in August. A critter at the Smithsonian-run National Zoo in Washington named Ringerl was thought to be a sister species, the olingo. She refused to mate with olingos, however. “It turns out she wasn’t fussy,” Kristofer Helgen, the Smithsonian’s curator of mammals, told the Associated Press. “She wasn’t the right species.”

A tiny wood scorpion was discovered in Turkey this year. It’s stingers are only about as harmful to humans as a mosquito proboscis.

Tiger cats in northeastern Brazil were found to belong to a different species than those in other regions, though they appear very similar. The species has been separate from its sister species for millennia. The little feline is elusive, as it is nocturnal and prefers thick vegetation and high altitudes.

The Falkland Islands, Liechtenstein, and Austria have the highest percentage of their nations’ land used for organic agriculture, 19.7 to 35.9 percent.

Americans, Germans, and the French consume the most organics worldwide.

In Asia, China has the most organically certified land (1.9 million hectares), but the estimate is controversial as oversight and regulation in the nation is notoriously problematic and many products deemed safe or healthy by the communist regime have proved toxic.

In 2013, some international trade policies relating to organic imports and exports were solidified and 2014 should see more such agreements.

Gilles-Eric Seralini of the University of Caen in France and his colleagues published a study this year that found rats fed Monsanto GM crops suffered mammary tumours and liver and kidney damage, with a significantly higher premature death rate than rats fed non-GM food.

FreshPaper cuts down on food waste using a generations-old Indian herbal mixture. Kavita Shukla accidentally drank contaminated water in India while she was visiting. Her grandmother gave her a spiced tea remedy, the herbal mixture of which Shukla later realized also had an amazing preserving effect on fruits and vegetables. She used it to create paper bags for storing produce that keep food fresh two to four times longer. She patented her FreshPaper at the age of 17 and won a 2013 INDEX: Design to Improve Life award for her invention.

On Nov. 7, Duke University released its five-cell meta-material array, a device that collects Wi-Fi radiation and converts it into electricity. The ability to harness these Wi-Fi waves could be built into cell phones to help them charge wirelessly; it could be built into the ceiling of a room to capture the waves and convert them into useable energy.