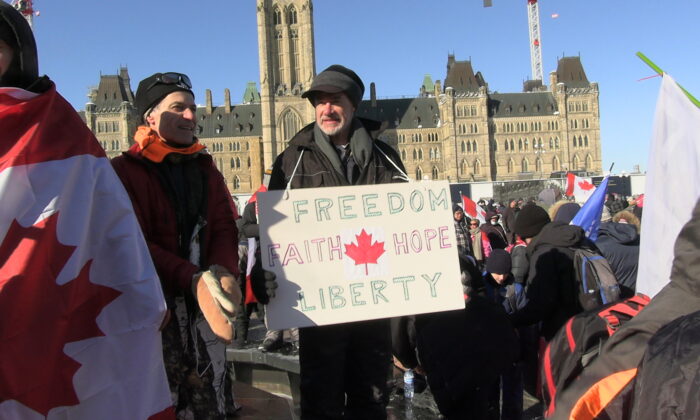 Protesters gather on Parliament Hill in Ottawa to demonstrate against COVID-19 mandates and restrictions on Feb. 5, 2022. (Annie Wu/NTD)
Viewpoints

Our Pandemic of Stupidity

As a scientist and a believer in human rights and individual responsibility, I’ve been appalled by the unfounded, unscientific, counterproductive, and authoritarian “public health” policies that have been foisted on an innocent public by out-of-control politicians and bureaucrats.

Starting at the beginning, it was stupidity that inspired the American funding of gain-of-function research in China, and stupidity that likely allowed the virus to escape from the lab in Wuhan. The dispersion of the virus around the world by the Chinese Communist Party, however, seemed not to be stupidity, but intentional strategic maliciousness, as proven by the fact that air travel throughout China from Wuhan was blocked by the regime, but air travel from Wuhan to other countries was allowed, perhaps encouraged.

When President Donald Trump blocked flights from China into the United States, he received cheers of gratitude from all corners of the country. Only joking: Trump was roundly denounced by the Democratic Party as a xenophobe and racist. Then Democrats doubled down on the racist accusation when Trump referred to the “China Virus.” Has anyone ever been called a racist for saying German measles or Spanish Flu? For Democrats, the virus was never the enemy; Trump and Republicans were the enemy.

In fact, for the Democrats, the pandemic was a great asset. They followed the principle that they had so often enunciated: Never let a good crisis go to waste. Government officials, particularly Democrat governors and “public health” bureaucrats in U.S. states, and premiers in Canadian provinces and their “public health” bureaucrats, used the pandemic as cover for a massive power grab and suppression of individual rights, as well as a negation of common sense and reason. Assisted by the Democrat heritage and cable media in the United States and the liberal and socialist media in Canada, they stoked fear in the public, greatly exaggerating the threat of illness and death. They pointed to a fabulist computer projection of massive death, rather than basing their policies on past experience of pandemics. This set the scene for the avalanche of lies and futile policies from politicians and “public health” bureaucrats. The first casualty was science.

Using the slogan, “15 days to flatten the curve,” they closed many states and all of Canada down for two or more years. Lockdowns that required the closing of many commercial enterprises, educational institutions, and houses of religion were a favorite policy. Small businesses were shuttered, including stores, restaurants, bars, hairdressers, barbers, and gyms, while allowing liquor and cannabis stores to remain open. (Only politicians had access to facilities otherwise closed.) In some cases, people were forbidden to leave their homes, even to walk their dogs. Did these measures save us from the pandemic? Of course not; they were entirely futile. Jurisdictions with lockdowns did no better in virus cases and deaths than those that didn’t lock down. A virus can’t be stopped by hiding from it. Most people were infected by the virus at home.

Special condemnation should be showered on the teachers’ unions, ever lobbying for teachers’ narrow interests and always against the interests of the children to whom they are supposed to be dedicated. Public schools were closed, and unions leveraged prospects of reopening for more pay, easier regulations, and the implementation of preferred public policies such as defunding the police. In place of students going to school, online classes were offered. Legions of parents had to give up their jobs to stay home with the children. As far as the online classes were concerned, the children learned nothing, and so two years of education and socialization were lost, giving them a deficit that they will probably never make up.

While the online classes were useless for the children, they were very educational for the parents. They learned that the curriculum didn’t consist of reading, writing, and arithmetic, but condemnation of America, hate for bad oppressor races and sympathy for victim races, and grooming to become LGBTQ++. Teachers’ unions claimed that none of this was being done, but vowed that it must be continued and would be defended with union treasuries.

When schools were finally opened, teachers’ unions, school boards, and municipal officials colluded to impose all day mask wearing on children, in spite of the proven facts that cloth and paper masks don’t protect against the virus, and that children were hardly at all vulnerable to COVID-19. As well, billions of dollars had been sent to schools for COVID avoidance through improved ventilation and other measures but were not spent on that, and the funds were reallocated to “social justice” programs such as “anti-racism” critical race theory, Marxist interpretations of American history, such as the “1619 Project,” and LGBTQ++ grooming.

When the Trump vaccines that the Democratic Party said couldn’t possibly arrive in time to help actually did arrive in record time, the Democrat Biden administration, now in charge, decided that they were a panacea and had to be made obligatory. After all, they claimed, COVID-19 was a “pandemic of the unvaccinated.” Several facts were not carefully noted: the Pfizer and Moderna products were entirely new and experimental technology, and were only called “vaccines” once our “public health” bureaucrats redefined the meaning of “vaccine.” The testing of these “vaccines” was truncated, the reports not transparent, and long-term effects were unknown. Deleterious side effects were underreported and hidden from the public.

Mandates for the vaccines were imposed by governmental authorities in most jurisdictions, by many companies, and most colleges and universities. The most basic ethical principles of the medical field were discarded: “Informed consent” was thrown out entirely by the mandates. So too was “my body, my choice,” which had been a pillar of Democratic Party ideology for decades, but apparently it only applied to killing your babies but not to having experimental drugs with unknown consequences injected into your body. Even the Hippocratic Oath, “do no harm,” was ignored as lockdowns led to pandemics of depression, exclusion from treatment for other illnesses, drug overdoses, domestic violence, and youth suicides, and the “vaccines” led to serious side effects, long-term disability, and death in some recipients. Finally, the resistance of the administration to recognize existing, safe, inexpensive treatments for COVID-19 led to unnecessary illness and death.

But “harm” came not only in illness and death but also in intentional bureaucratic punishment for those who had the temerity to refuse the vaccines. The “great heroes” of the first years of the pandemic—hospital workers and truck drivers—were fired from their jobs for refusing the “vaccine,” as were government workers, highly trained members of the military, and even university professors. The vaccine mandates ignored the fact that people who had had COVID-19 and now had natural immunity were better protected than those with “vaccines” alone, as well as ignoring the claim that the “vaccines” would protect the recipient and others from getting infected was false, as infection of the vaccinated showed up again and again, and that the vaccines failed in a short time in providing protection, never mind from new strains of the virus.

Comparisons between states that had lockdowns and mandates, such as New York, Michigan, and California, with states that didn’t, such as Florida and Georgia, showed no difference in COVID-19 cases and deaths. Comparisons between schools that had mask mandates and those that didn’t showed no difference in COVID-19 cases and deaths. Countries that didn’t lock down and didn’t close schools, such as Sweden, did as well in cases and deaths as countries that locked down. The differences between states are that the fear, control, and power grab were enhanced in states with mandates, which after all was the point. Will anyone believe “public health” bureaucrats again? How much trust do you have for the government post-pandemic? Here in Canada we still have mandates for useless masks for travel and, in British Columbia, for medical offices. Our “obedience masks.”

Finally, the cherry on the top: When truckers, previously “heroes” for keeping the country going in spite of the pandemic, demonstrated for the lifting of onerous and unnecessary COVID-19 mandates, their parking violations in Ottawa inspired Prime Minister Justin Trudeau to invoke the current version of the War Measures Act. Trudeau claimed that the demonstration was an insurrection intended to overthrow the government. He ordered breaking up the demonstration with violent police brutality and seizure of the participants’ bank accounts, and threw the leaders in jail.

“Public health” dictatorships were foisted on the public in the United States and Canada, as well as Australia, New Zealand, the UK, and many European countries. The futile policies imposed did little to stop COVID-19, but had massive deleterious side effects, particularly the loss of individual rights and autonomy. Doctors, scientists, and others who pointed out the faults in those policies were ignored, censored, or actively canceled. In recent months, most countries have at least temporarily canceled their dictatorships, but it continues strong in Canada and shows no signs of abating.