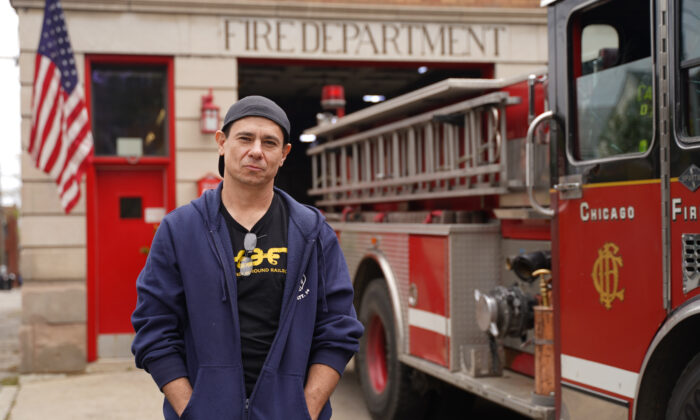 Scott Troogstad stands in front of Engine Company 99 of Chicago Fire Department, on the southwest side of Chicago on Oct. 28, 2021. (Cara Ding/The Epoch Times)
Social Issues

CHICAGO—To Scott Troogstad, government control over people’s lives has spread like a fire since the pandemic.

Small businesses owners were deprived of livelihood, students could not go to schools, faith believers were forbidden to pray at their churches—and now, that fire has reached his own firehouse.

Troogstad and his team had worked around the clock to respond to COVID-19 patients throughout pandemic, putting their own lives at risk. Some contracted COVID-19 and beat the virus after days or weeks of headaches and fever. Yet now, they were told they could not serve the city anymore, not until they get the shot.

That was a last straw that set him off on a bumpy journey of civil disobedience.

“Finally, we got to a point where the government encroachments started to affect everybody. We got to the point where people are going to rise up. When I say ‘rise up,’ I mean nothing more than simply not comply,” Troogstad told The Epoch Times.

He did not report his vaccination status, nor did he submit a vaccination exemption request—he became a member of a fighting minority who will not comply in any way, shape, or form.

By mid-October, roughly three out of ten CFD employees refused to report their vaccination status by the deadline.

Other reasons for noncompliance include unwillingness to disclose medical information, protecting union bargaining rights, confidence in natural immunity, and safety concerns with the vaccination, according to interviews with a few CFD firefighters and a paramedic by The Epoch Times.

“If I don’t take a stand right now, I couldn’t look my children in the eye. That’s the way I feel about it—we are at a point where you have to act to preserve the American freedom for our children,” Troogstad said.

He was put on no-pay status, along with a few dozen other CFD employees. To him, that means a monthly paycheck loss of around $8,00o as a fire captain, and a potential loss of his health insurance in the coming weeks.

His wife, who still works, has health issues and relies on monthly medication costing $5,000. He also supports two children, a son in college and a daughter in high school.

“My wife, I, and my kids are on the same team. I believe the moment we stand in is bigger than anything for us personally,” Troogstad told Epoch Times, almost coming to tears.

“It is time for us to start acting like Americans and reclaim our position as the government. I have nothing but faith in God. It will be a bumpy road, but I will be fine,” he said.

On Oct. 21, a day after he was put on no-pay status, Troogstad filed a federal civil lawsuit along with 113 CFD employees and 21 city workers against the city of Chicago over the vaccine mandate.

It is the type of lawsuit commonly seen across the country, where state and federal judges are asked to reconcile the competing interests of public health and personal freedom during an unprecedented pandemic.

In Troogstad’s case, federal judge John Lee on Oct. 29 denied the request for a temporary order to halt the city’s vaccine mandate, basing his ruling on two legal precedents.

In the coming weeks, Judge Lee will consider the request for a preliminary order to halt the city’s vaccine mandate, after an examination of more evidence and arguments from both parties.

By Nov. 1, hundreds of previously noncompliant CFD employees changed course and complied with the mandate; a few decided to do so after being placed on no-pay status.

But Troogstad is staying the course. He tries to keep up his hope about the lawsuit, while at the same time looking around for jobs.

His last CFD bi-weekly paycheck arrived on Nov. 5, and it says $600. His side gig at Northern Illinois Public Safety Training Academy training firefighters helps pay some of the bills.

But he needs to look for a job that comes with health benefits to cover his wife’s expensive medication. Any job he could find probably pays half of his fire captain income, he said.

“If I lose the fight, it will break my heart. But God has and will set me on a path, and I’ll continue to follow that path wherever it leads me,” Troogstad told The Epoch Times.