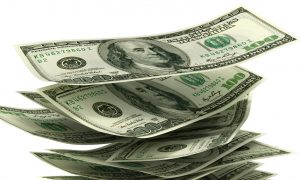 Newly redesigned $100 notes at the Bureau of Engraving and Printing in Washington on May 20, 2013. (Getty Images)
Viewpoints

I’ve been sounding the alarm about chronic federal deficit spending—practiced by both Republicans and Democrats—steering our country into a fiscal abyss for more than a decade. I feel like a broken record as I periodically chronicle the folly of it all. The process has taken on an air of inevitability as we watch what feels to me like a slow-motion train wreck.

I’ve remarked on various milestones along this dangerous course:

Americans as a people and a polity are astoundingly indifferent to debt and have embraced it as the (temporarily) normal way to live.

One disturbing marker along the way was the grim prospect of more of our tax dollars going to service the national debt than on national defense. (I also pointed out that this has only been possible because a compliant central bank, the Federal Reserve System, has suppressed interest rates—the cost of borrowing money—for more than a decade and, indeed, has painted itself into a corner that makes ultra-low interest rates their only policy option until a financial cataclysm occurs.)

I noted that populist President Donald Trump—despite adopting a number of economically intelligent policies—was completely unwilling to rein in federal spending. Unlike some Republican leaders in previous years, Trump perceived that Democrats’ big-spending agenda was unstoppable. He indicated this major concession by readily agreeing to suspend Uncle Sam’s statutory debt ceiling in the summer of 2019 and then adopted a $1.4 trillion increase in the government’s discretionary spending in December 2019. Since then, the deficit spending problem has accelerated at a dizzying pace.

In my article about the December 2019 spending blowout, I underscored the simple mathematical fact of life that federal deficits were growing, because even though the government’s revenue was increasing by 4 percent, spending was rising by 8 percent. Fast-forward to the present: According to the Bipartisan Policy Center’s Deficit Tracker, as of this month, “While revenues have grown 6 percent year-over-year, cumulative spending has surged 45 percent above last year’s pace.”

We have a spending problem, not a revenue problem, folks.

The pretext or (ir)rationale—whatever you prefer to call it—for this stunning increase was the enormously problematical federal response to the COVID-19 pandemic. Thus, in fiscal year 2020, the federal government spent $6.55 trillion while collecting $3.42 trillion in revenue. In other words, almost half of federal spending was covered by new debt. This happened with the full support of a Republican president.

Just since Biden became president, more than half of federal spending is being financed by debt. Biden, with the help of Speaker Nancy Pelosi (D-Calif.) and Senate Majority Leader Chuck Schumer (D-N.Y.) (and the tie-breaking vote of Vice President Kamala Harris), rammed through his $1.9 trillion “American Rescue Plan.” (Note the word “plan,” think “socialism,” and see the dots connect.)

Biden tried to sell that plan to the public as a COVID-19 relief plan, but approximately 90 percent of the money appropriated is for other purposes. And now he’s pushing his “infrastructure” package with an initial cost of $2.2 trillion, although The New York Times estimates that it could ultimately cost more than $4 trillion. Fortune magazine characterizes this new spending initiative (innocuously labeled “American Jobs Act”) as a “grab bag” in which perhaps a quarter of the money actually would be spent on infrastructure.

Let me make two points about trillions of dollars of new government debt:

First, while a traditional viewpoint would assume that our children will have to pay for it, that will never happen. Oh, our kids will pay a price for this fiscal folly, that’s for sure, but don’t expect them to repay the debt. I say this for two reasons: 1. The amount is impossibly large and simply cannot be repaid (except perhaps with wildly depreciated currency); 2. Look at Democrats’ eagerness to pardon college debt and give away all sorts of expensive freebies; they clearly believe that debt is not a commitment to honor, but an inconvenience to be disregarded. Borrowing for free is the progressive panacea. Expecting the repaying of debts is a bourgeois, capitalist injustice.

Second, and more fundamentally, our method of public finance is utterly broken. Approximately half of American workers paid no income tax or even received annual payouts from Uncle Sam before the more recent spending increases. While I certainly don’t believe in kicking people when they’re down, excusing masses of people from paying any income tax at all creates incentives for those voters to support higher government spending because they know they won’t have to help pay for that spending—voilà, deficits galore. But it gets worse.

In doing my 2020 taxes recently, it dawned on me that we received more from Uncle Sam under the COVID-19 direct payments plan than we owed in taxes. Uncle Sam is paying me more than I’m paying him, and I’m the definition of a middle-class taxpayer. How can a government afford to pay its middle-income citizens more than they pay the government?

The government not only “should not” support us, they literally cannot. Government has no wealth but what it first takes from real people, so if most people either pay no taxes or receive payments from the government, you have an unviable fiscal policy. This is folly—madness, really—of the first order.